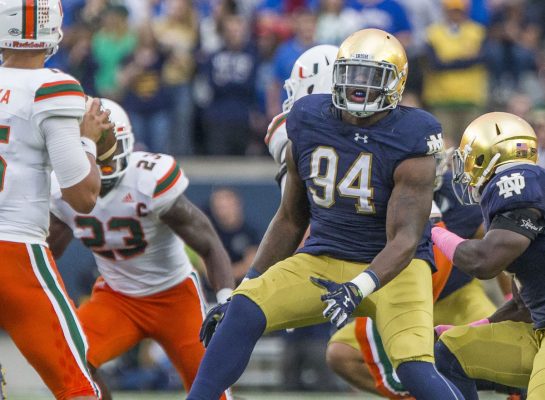 After a discouraging loss to Stanford and an extra week of rest, I was fairly confident that Notre Dame was both hungry enough and well rested enough to secure the win against Miami. It may not have been as convincing as we all would have liked, but a win is a win, and we’ll take it. How did the Notre Dame defense perform in last Saturday’s match-up against the Miami Hurricanes? Lets have a look!

The Notre Dame defense allowed the Miami offense 20 first downs; 3 rushing, 15 passing and two penalties. Miami was allowed to gain 306 yards of total offense; 288 yards of net passing and 18 yards of net rushing. This is the first time the Irish have held a team to under 40 yards of rushing since the win over Purdue in 2013. With such lopsided numbers between rushing advances and passing advances, we can clearly see what the defense needs to work on this week. Miami’s offense was able to convert on third down 7-of-19 times, and on fourth down 0-of-1 times. Miami had possession of the ball for 33:25 minutes, and Notre Dame had possession of the ball for 26:35 minutes.

Nyles Morgan was also a shining star for the Notre Dame defense. Morgan had a sack at 5:30 of the second quarter, a pass broken up at 12:30 of the fourth quarter, and made two huge defensive plays to end Miami scoring threats. His sack pushed the Hurricanes back 17 yards and moved them out of field goal range.

Q. Jarron Jones and the rush defense today held them to 2 yards in the first half and
18 for the game. Dominant effort by your —

COACH KELLY: Dominant effort against a Power Five football team that was nationally
ranked a few weeks ago. I think that’s about as good a performance that we’ve had in a
while here. Jarron was outstanding. He was awarded the game ball.
What I think stands out to me more than anything else is when your senior is playing his
best ball. That says a lot about how he feels about coming to work every day, getting better,
regardless of the record. I think that’s a real positive for our program and for him
individually. He was a beast today out there.

Q. What can you build from the defense’s play overall — I mean, they were put in bad
positions today — and how they handled the last drive by Miami?

COACH KELLY: Well, I think, first of all, any time that you can hold anybody in college
football to an ineffective running game and then pass breakups. We do sack the
quarterback here at Notre Dame. So for you guys that didn’t think that happened, we
do sack the quarterback. If you want to go direct snap and drop back, we can get to you.
Now, if you just catch it and throw it, it’s hard to get to you. So we can sack the quarterback.
I thought it was a complete effort from a defensive standpoint. There are things we can do
better, there’s no question, but I thought the run defense was solid. I thought we got our
hands on balls and pass breakups and deflections. And we pressured the quarterback. So I
thought a lot of good things happened out there today defensively.

Q. Strategically, what allowed Jarron to make the impact that he did. What got him
through this so often?

COACH KELLY: We’re playing a lot more three downs, so he’s on the center. I don’t know if
you saw a lot of things that we were doing, but we’re — you know, we’re hugging up those
guards, and any time you bring the guards — the guard has Nyles on top of him, and he
doesn’t know whether he’s pressuring him or not, Jarron is one-on-one with the center. A
couple of times, we were able to get him one-on-one. You can’t block him one-on-one.

On what it’s like in the closing minutes of a close game…
“You just realize how much little things can actually determine whether you get a win or a
loss in the game. And things like that can actually determine it and it’s just crazy because
after we’ve been through all those five losses where they were decided by small things you
realize how big that fumble could have been and how that could have changed the game
and one missed tackle and how that could have changed the game so it’s just crazy when
you’re in the moment.”

Jarron Jones – Gr. – Defensive Lineman – Notre Dame
On the mood of Miami’s last drive…
“Our main focus was to get a turnover. We were excited for this last opportunity because
there were past opportunities where we didn’t come out successful.”

On the mood in the locker room before this win…
“We were very upbeat and excited for this game and another home opportunity against a
bitter rival in Miami. It was a great chance to show what we can actually do.”

On the importance of this win…
“This win was critical because we have to win out to go to a bowl game and that is our
focus. We would like to finish out the season 7-5.”

As Notre Dame has progressed through the season, the defense continues to make improvements, but there is still work to be done. Holding Miami to 18 net yards of rushing is quite impressive, but giving up 288 yards of net yards of passing shows us there is work yet to be done. The fact that this team was able to make some mistakes, shake off their funk, face their adversity head on and secure the win shows me that this team truly does have some grit and has the capacity to win. This is very important for this team as they move toward the final stretch of the season and head down to Jacksonville to face the Naval Academy on Saturday. Was this game the turning point that creates an upward swing for the rest of the season? What say you?