Coach Brian Kelly has dismissed Max Redfield from the team after senior free safety was charged with possession of a handgun without a license and possession of marijuana Saturday.

Here’s a look back at a roller-coaster career for the Mission Viejo, Calif. product: 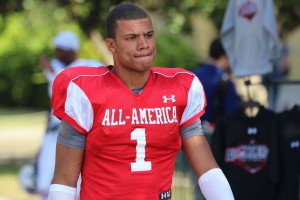 July 18: Redfield commits to the USC Trojans, saying he felt “almost giddy” and “so excited to be part of the Trojan family. I’ve been talking to Lane (Kiffin) the past two days about when I should make my announcement and I decided now was the perfect time. I’ve known I wanted to go to USC basically ever since they offered me and I’ve always liked USC football. It feels great to be a part of this loaded recruiting class.”

Oct. 13: The high school senior visits for Notre Dame’s thrilling 20-13 overtime victory vs. Stanford. Afterward, he tells Fox Sports Next that his commitment to USC is “soft,” adding, “The thing that really separates Notre Dame, is other than athletics and academics, how much that degree really means and how meaningful it is to have a Notre Dame degree in the business world, once you’re done with football.” 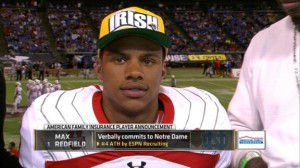 Committing to the Irish at the Under Armour All-American game

Jan. 4: During the Under Armour All-American game, the 6-foot-2, 195 pound five-star safety chooses the Irish over USC. “This is another major recruiting victory for Kelly and his staff with more expected to come,” IrishEyes.com’s Dave Berk says at the time.

April 25: Although not an early enrollee, Redfield is expected to compete for playing time in nickel and dime packages according to IrishEyes.com’s Tim O’Malley.

Aug. 13: O’Malley proves prophetic, as he writes: “There’s going to be a mental end of it that he’s going to have to progress there. But we feel like physically he’s got the ability.”

Redfield plays in 12 of the Irish’s 13 games, but mostly on the Irish’s kickoff coverage, kickoff return and punt coverage teams. He logs his first start in the New Era Pinstripe Bowl versus Rutgers. For the season, he has 12 tackles – with three each against Air Force and BYU.

May 9: Before the season starts, O’Malley puts Redfield on his list of potential future NFL players: “Size? Check. Speed + quickness = suddenness? Check. Intelligence? Check. Made a play yet on Saturday? We’ll get our initial answer to the most important aspect of the equation beginning in late August 2014. A true sophomore, Redfield should have an outstanding career in front of him at ND.”

June 30: Keith Arnold, writing for Bleacher Report, calls Redfield the Irish’s “X-factor” and “one of the keys to Notre Dame’s season.” A month later, UHND.com will tab the sophomore as “a breakout candidate.”

Aug. 9: Coach Brian Kelly is impressed with the sophomore during fall camp: “He’s made a good jump. Max is an extremely, as we all know, a very gifted player. We’ve just gotta continue on the learning curve. We have days where you miss and assignment here and you can’t miss an assignment back there. That’s where some of our inexperience, we have to be vigilant in making sure that we’re clean back there. But he is, as we all know, an extremely gifted player.”

Nov. 15: Redfield loses his starting position to freshman Drue Tranquill. Kelly observes, “We’ll evaluate it from week to week, but no, we felt like we weren’t getting the kind of production we wanted there, and that’s why we went with Drue.” O’Malley later calls it a “curious…benching.”

Nov. 29: Redfield suffers a broken rib in the season-ending finale against USC, a 49-14 drubbing.

On the season, Redfield plays in 13 games and starts 11. He’s second on the team in tackles with 68, despite logging just 1 against Northwestern and none against Louisville. His big games are against Michigan, where he registered six tackles, one interception and one de-cleating of a quarterback and the bowl game versus LSU, in which Redfield logs 14 tackles and gives every Irish fan hope that the sophomore has turned the corner for real.

June: Phil Steele, a highly respected college football analyst, names Redfield to his pre-season first team. “With the season that I had last year, I don’t feel really that deserving,” Redfield will say later. “But I feel like I’m definitely that kind of player, and I want to prove that every day in practice. I’m just happy to be on the radar. That’s all I can ask for.”

Aug. 11: In what is probably the quote of his career, Redfield says he’s struggling more with defensive coordinator Brian VanGorder’s schemes than he is with learning a foreign language. As Blue & Gold Illustrated’s Lou Somogyi writes:

An eloquent and confident speaker, Redfield has carried 18-credit academic course loads at Notre Dame per semester, most notably learning Mandarin Chinese. When asked whether VanGorder’s defense or Chinese was more difficult, he paused.
“That’s a pretty good question,” he responded. “I would say consistently being successful in that scheme is harder than learning Chinese.

Sept. 5: Redfield breaks his wrist in the season opener against Texas.

Sept. 12: The wrist is operated on prior to the Virginia game, and Redfield struggles.

Sept. 19: Redfield is benched and does not play against the option-heavy Georgia Tech offensive attack.

Oct. 2: The junior records what Kelly calls Redfield’s “best game since he’s been here,” with 14 tackles – 11 unassisted – in a close loss to Clemson. (In a monsoon!) 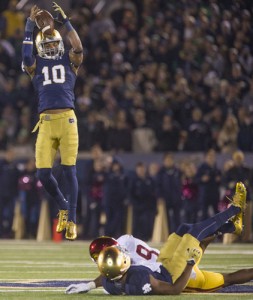 Oct. 16: Redfield records his second career interception in a game against USC.

Dec. 29: Redfield is sent home from the Fiesta Bowl for an “unspecified violation of team rules” – later revealed to be multiple missed curfews. He issues an apology, in which he says he understands that not following rules is “unacceptable.”

On the season, Redfield logs 64 tackles – four best on the team and second among defensive backs.

Entering the season, the senior has 23 career starts – trailing only cornerback Cole Luke (26) and defensive end Isaac Rochell (25) for most career starts on defense.

Press Notre Dame’s head coach a little bit harder and Kelly might also concede that never in a million years did they think Redfield would be the type of player to stick around for five years in South Bend. Nor did they think it’d take a full four years to develop Redfield into the cornerstone that this unit desperately needs on the back end.

While his athleticism has never been questioned, Kelly discussed some of the offseason priorities for the rising senior, namely some physical tweaks to Redfield’s game— lengthening his backpedal, smoothing out some of his movement skills. But the real work will likely come with the immediacy of the situation and an extra dose of maturity, as Redfield has only one more shot to prove his worth on the football field. 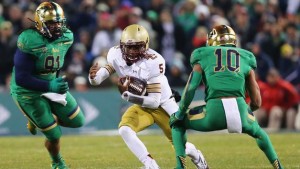 “If I could go back, obviously I wouldn’t do that — but I learned a lot from it.

“I moved forward from it the second it happened, and try to learn from it and try to become a better person, player, all that kind of stuff. And even though it did hurt, just move forward and just realizing what I can learn from it and how I can grow from it to make sure it doesn’t happen again.”

June 1: Irish Illustrated’s Tim Prister writes, “There’s a natural inclination to cringe a bit when the up-and-down Redfield is cited this high in returning defensive productivity. Redfield’s 144 career tackles are the most among returning players, but his six passes defensed in 23 starts doesn’t seem like a whole lot for a free safety. … Redfield has his hands full holding off early-entry freshman Devin Studstill. Notre Dame needs him to maximize his playing experience, win the starting job, and play the game commensurate to his playing time accrued/skillset.”

June 1: B.J. Konkle, writing for our site, says: “I believe the light will turn on for Redfield and he will become the commanding leader of the defense’s back end. I won’t give up on him just yet because of his sheer athleticism. Redfield has been his own worst enemy. But if he can put as much effort in the film room as it looks like he does in the weight room, then this upcoming season will be the one where we consistently see what recruiting analysts saw in this five-star talent in 2013.”

July 22: Irish Illustrated’s Tim Prister rates Notre Dame the sixth most talented defensive backfield among 12 Irish opponents and themselves. “It’s now or never for Redfield, who yielded a majority of the first-team reps in the spring to talented early-entry freshman Devin Studstill.”

July 24: UHND.com puts Redfield on their list of “now or never” candidates.

July 28: CBSSports.com’ Rob Rang profiles Redfield as a potential NFL draft pick if he can put together a solid senior season.

While many of the physical traits are there with Redfield, he simply remains too reliant on his talent at this time. Intelligence is not the issue for Redfield, a well-spoken Economics major and Mandarin Chinese minor. Put simply, Redfield has not consistently demonstrated ideal instincts for playing centerfield. Too often he has appeared more concerned with playing the man, rather than the ball, giving up potential interception opportunities in an attempt to land the flashier hit. 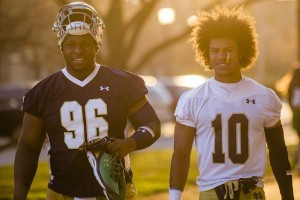 Aug. 6: The Journal Gazette’s Chris Goff tabs Redfield as a player to watch in fall camp. “It’s now or never for the former five-star recruit to live up to everyone’s high expectations,” he writes.

What we want to see from Max is that guy that does the basic things right. He was a guy that was up and down. We saw great flashes and then we didn’t see him for a couple weeks. If we just get consistent play from him, we’ll get really good play. If we went through five days here and we saw a consistent performer, I’d be pretty happy with that.

Saturday: Redfield is arrested alongside four other players after sophomore cornerback Ashton White’s car is stopped for speeding and a broken taillight on U.S. 31. Redfield is one of three student-athletes within an arm’s length of the handgun; all three receive the additional handgun charge.

Sunday: Kelly releases a statement about the arrests:

I have decided to dismiss Max Redfield from our football team.  …

At Notre Dame, where we place so much importance on the integration of students who are athletes into the broader university, the primary responsibility for discipline lies, as it should, with the University’s Office of Community Standards. But even within that system, there are times when a player’s conduct so clearly fails to meet the standards I have set for our football team that it is appropriate to take action independent of any decision that might be made by the Office of Community Standards. This is such an instance. The expectations we set for the members of our team are high, but they are especially so for the upperclassmen who are expected to provide leadership and a positive example to the other members of the team. Max … (has) failed in that regard and so [has] lost the privilege of continuing to be part of our team. 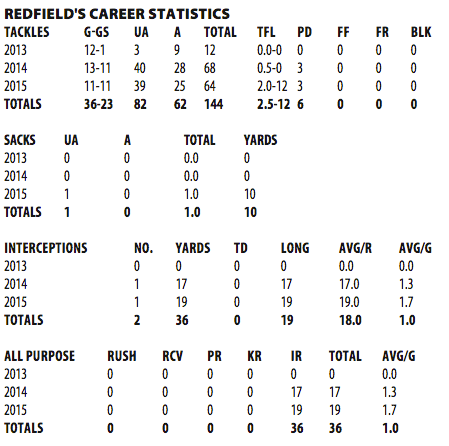 Previous Post: « Max Must Go: Likely Sequelae from Friday Night
Next Post: Did You Ever Have to Make Up Your Mind (Brian Kelly)? »