Irish Illustrated’s Pete Sampson offered this hypothetical Tuesday on Twitter. Sampson added Wednesday that he believed Wimbush would have prevailed each year, underscoring his point that this is the best depth in the Brian Kelly era.

Kelly indicated Tuesday that Wimbush would be given an opportunity to compete for the starting spot, backing off comments he made in February to Bruce Feldman that this year’s goal was to sit the sophomore and preserve a year of eligibility. At this point, however, the primary battle is between redshirt sophomore DeShone Kizer and redshirt junior Malik Zaire. 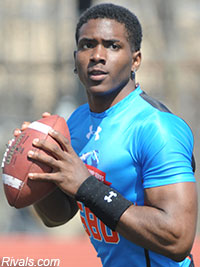 So, back to the question: Could Wimbush have won the first three QB competitions of the Kelly era? I asked Eric Hansen, the ND football insider for the South Bend Tribune, during his weekly chat, to weigh in:

“[In] 2010, I think Dayne Crist wins it and Wimbush is pushing. [In] 2011, I think Wimbush wins it. [In] 2012, I’ll go with Wimbush too. If Wimbush had more experience with the read option stuff in high school, I would have gone with him in 2010. But Crist, before he was injured twice, was a real talent with some mobility.”

“He has the best arm in this class, in my opinion. … I’ll put it this way: There’s no one that can match Brandon Wimbush’s arm talent. He, along with having a real strong arm, showed that he has accuracy as well. He completed an absurd percentage of passes this year as a senior.”

“He’s got a great arm. Precision passer. Terrific runner. Team leader. He’s got the skills to be a Heisman candidate in three years at Notre Dame. That’s how good I think he is. I think also his ceiling is higher than Golson or anyone on the team right now.”

DAYNE CRIST WAS A STAR IN THE MAKING TOO 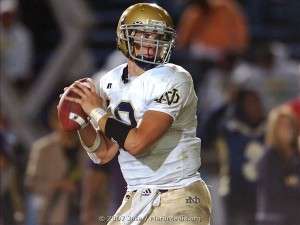 Scouts and coaches may have been high on Wimbush entering college, but they were even higher on Crist, a 6-foot-5 inch, five-star talent from California. Crist was Rivals’ #25 overall player, Scout’s 44th overall player and #8 on Tom Lemming’s Top 100 Recruits. (For comparison, Stanford QB Andrew Luck – who now starts for the Colts – was #28.)

Crist played parts of four games his freshman year (71 snaps) before tearing his ACL in his right knee in a game against Washington State. In Kelly’s first year – and with Clausen now departed – he won the starting role and performed well: 2,033 yards, completed 59 percent of his passes, threw for 15 touchdowns against seven interceptions.

Almost one year to the date of his first-season ending injury, Crist tore his patella tendon in his left knee. He was named the starter the following year, but pulled midway through the first game for sophomore Tommy Rees. Crist saw only sporadic playing time after that.

In Sampson’s theoretical situation, both Crist and Wimbush would be in their second year in 2010 – with Crist having earned snaps the previous fall. I agree with Eric Hansen; Crist seems like the choice for starter in 2010, even if Wimbush is there.

Wimbush is clearly more athletically gifted than Tommy Rees, so the competition in 2011 would have pitted the redshirt freshman against junior Crist – returning from two serious injuries. Rees and true freshman Everett Golson would have also been in the mix. With Crist’s mobility hampered by two injuries, a healthy Wimbush with a year in the system seems like the right choice to begin 2011.

By 2012, Crist has moved on. The battle would have been among junior Tommy Rees, redshirt freshman Everett Golson and true freshman Gunner Kiel. Kiel didn’t play because coaches decided preserving a year of his eligibility would be better than having him mop-up for Golson. Golson beat Rees, so the competition would have been between two redshirt freshman: Golson and Wimbush. Wimbush is taller, stronger, more comfortable running and has a better arm. Wimbush would have started.

WHAT DO THE STATS SAY?

Wimbush has had 28 snaps under center at Notre Dame. This is too small of a sample size to make accurate conclusions, but here’s the output anyway:

I agree with Eric Hansen and disagree with Pete Sampson. Crist prevails in 2010, but Wimbush is likely the starter in 2011 or 2012 in Sampson’s hypothetical scenario. That is fantasy. This is reality: I can’t wait to see more of Brandon Wimbush, whether it be this fall or the next one. He’s going to be truly special.