Who is ready for some Trojan Blood? I sure am. I love rivalry weeks. They’re like Christmas for a college football fan. the more petty the rivalry, the more I like it. Truth be told, USC’s got some actual history which I enjoy even more. This preview is a bit shorter than I wanted it to be, but with rivalries comes doubt. I recall being a freshman at Notre Dame in 2001 and winning the game not realizing it’d be the last time in quite a while for ND to defeat SC. But that absence made the eventual victory all the sweeter. So, to coming back to a battle doesn’t bother me. In fact, I love the petty, shallow but meaningful rivalry. I wish more things were exactly like sports.

The When/Where/What Time/Etc. 7:30 PM. Notre Dame Stadium. NBC sans Tom Hammond. In classic South Bend fashion, the city has elected for forgo the pleasant part of Fall and skip right on to the part where football 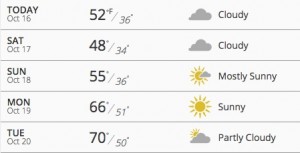 Saturdays are just a touch too cold. Anyone who talks to you about “football weather” is really just deluding him or herself into thinking that football isn’t actually more pleasant in 70 degree weather. This point isn’t up for debate. It’s like trying to tell me there’s a better cereal than Cinnamon Toast Crunch. I do not care the Special K is healthier. Give me all the cinnamon and sugar and relax on your strained definition of “good.” For the vast majority of you, this forecast does not matter. I’m sure there are some random weather facts to discuss that don’t actually have any relevance to this game.

The Opposing Coach:  This is where it gets a little beyond what I do in these previews. I legitimately feel bad for Steve Sarkisian. I hope he finds a way to move on with his life after getting the help he needs. Without a lot of Sark content to focus on, the game turns towards offensive coordinator/interim head coach Clay Helton. This is, almost astoundingly, Helton’s second time being an interim head coach. He’s been a member of the USC staff for as long as Brian Kelly’s been Notre Dame’s Head Coach. His track record as a position coach is solid. He was an obvious fit to take over under these trying circumstances. The only other thing to mention particularly about Helton is the fast circulating statistic that this is now the fourth different USC coach Brian Kelly has faced in four seasons (Kiffin, Orgeron, Sarkisian, Helton). As I mentioned on twitter earlier tonight, I feel like we’re just getting the inferior version of next year’s stat where some blowhard trying to sound smart will note this is the fifth different USC coach Kelly’s faced in 5 years.

Troy’s Last Game: It’s tough to say that it’s the game that sealed Steve Sarkisian’s fate, and in fact that might trivialize his issues, but what was certainly a near death blow to the 2015 season was Washington’s 17-12 victory over USC last Thursday night. It was not a pretty game for sure. The Trojans outgained the Huskies in offensive yards but were ultimately doomed by failing to sustain drives and turnovers. The Trojans were just 1/13 on third down conversions. They compounded poor execution with, well…additional poor execution.

The astounding part was just how poorly Cody Kessler performed. In his first 4 games, Kessler had 15 touchdowns to 1 interception and completed well over 70% of his pass attempts. Versus Washington, Kessler tripled his interception total, failed to throw a touchdown, and had his lowest completion percentage of the season. In fact, you have to go back to the last time Kessler visited Notre Dame Stadium to find back-to-back game where he failed to complete 60% of his passes.

Team Talent:  By raw recruiting rankings numbers, USC is the most talented team Notre Dame will face all season. Even with the scholarship restrictions, the Trojans continue to bring in a massive amount of talent. On the 2015 schedule, there is no question that USC had been and will probably continue to be the biggest threat to get massive talent. SC’s 2015 and 2014 classes were the best ND has seen (including ND’s). Going all the way back to 2011, among ND’s 2015 opponents, the Trojans have consistently been at the top of the talent pool. Not only does USC acquire talent, but their most highly recruited player generally make a splash early.

A great deal of the success of the Irish on Saturday will be contingent on stopping a pair of true sophomores from dominating the game. Adoree Jackson and JuJu Smith-Schuster were both members of the 2014 recruiting class for USC that finished second nationally. Smith-Schuster is the leading receiver from a receptions standpoint for the Trojans while Jackson leads the team in yards per reception despite only averaging a couple of receptions per game. Jackson is also a game breaker in the special teams, which is where ND needs to spend a particular amount of focus.

I’ve honestly agonized over this game to try to find some interesting pieces of information, but truth be told, this is a game that defies the normal analysis. I’m confident ND can/will win, but how so? I’m pretty unsure.