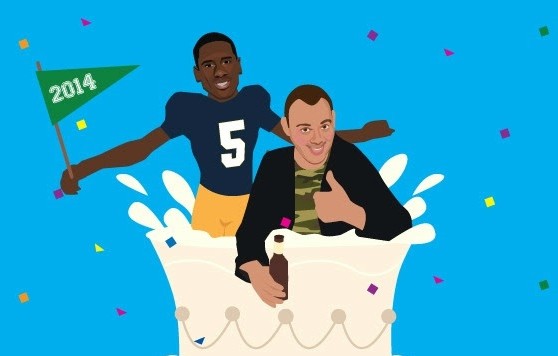 Credit: The talented @phillykelly, of course

This isn’t a prank. You didn’t misread the headline. I am beyond pumped and pleased to announced that The Subway Domer has joined the staff of Her Loyal Sons.

If you have no idea who The Subway Domer is, man have you missed out. Beyond running SubwayDomer.com, Subway has been an integral part of the lifeblood of the ND blogging community. He is the godfather of the IBG (Irish Blogger Gathering) which allowed for many of us, myself included, to get our foot in the door and get even the smallest of blogs linked on his site, HLS, UHND, and One Foot Down among others. The IBG has taken on many forms (and eventually laid to rest…for now…) and had many different participants come and go, but it remains an integral part of the history of our site and many others.

But beyond the IBG, Subway has also been crucial in discovering and getting some incredible talents and showcasing them on his site. The awesome graphics we have from Philly Kelly? Thank Subway. The incredible and detailed film breakdowns that we are able to feature from Blog Davie? Thank Subway. You ever hear of ND Fan Radio? Yep, they’ve been on Subway’s staff too. And those incredible highlight reels with the best music ever that we showcase every week from SupermanTDJesus? THANK. SUBWAY.

Back in 2013, HLS was incredibly fortunate to have everyone listed above come through our virtual doors as Subway decided that he would retire from blogging. Many of them are still with us today and I can say with 100% that HLS isn’t what it is today without them and Subway wanting them to come to us.

Of course, Subway did come out of blogging retirement. I would say that he came back like Jordan wearing the 4-5, but I’m going to say it’s more like the Green Ranger coming back as the White Ranger. Why? He came back and kicked ass solo again, but NOW WE NOW HAVE A ND BLOGGING MEGAZORD:

Power Ranger references and jokes aside, this is huge for us. So huge, that Subway won’t just have a spot on our staff, but he will be joining the editorial staff along with Biscuit, Bayou, and I. It is only appropriate for someone that has put years into this and has done so much for us as well.

Hopefully, this is the first of a couple cool things that I will be able to announce because of this new partnership. But, for now, please join me in welcoming Subway Domer to Her Loyal Sons!