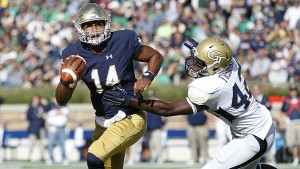 Good morning! The third episode of Showtime’s “A Season With Notre Dame” aired last night. While the trio of shows has been excellent, last night’s was the best.

The moment that had the most impact was an honest conversation that was captured between new starting quarterback DeShone Kizer and Jac Collinsworth, a Notre Dame student and FTT major who has his own football podcast. The beat reporters have praised Kizer for his poise both on and off the field, but the redshirt freshman from Toledo definitely admitted to having doubts about his own worth to the team.

Here’s what he said:

“It’s funny. One of your questions about ‘How much did your life change?’ I never, never expected all this stuff to happen the way it is. Just, I mean, if you look at my Instagram – I go from 400 likes on a picture to 1,800 likes in literally a day. I’m expected to go from nothing to everything in three days. There’s no transition at all. It’s just – Coach Kelly looks at me differently. He just expects me to be the starting quarterback at Notre Dame. Everyone just expects it. No one really understands that. You go from doing – I mean, I live in a dorm. You know what I’m saying? I’m trying to go and grab a snack from LaFun at night. All of a sudden I have this pressure. There’s all this obligation that you have as a Notre Dame quarterback. I just never really prepared myself for, I guess.

“Dude, I – this is like – going into the summer, I literally hit rock bottom. Rock bottom. I mean – I wasn’t throwing the ball well. I was the third string quarterback. Am I really even playing the right sport? I was thinking that to myself: ‘Why did I even play football?’ I could be out there throwing the ball – 93, 94 miles per hour. Why not just play baseball? I was contemplating everything.

“I went 1-for-5 for 3 yards in the spring game. Heck, I got a safety – what dual-threat quarterback goes backwards and gets tackled in the end zone? You know? I was so down. Finally, I was like: Look. There’s no more redshirt next year. There’s no more Everett Golson versus Malik Zaire. There was nothing. The only thing stopping me from playing was myself every time.

“This man really completely turned himself into almost a role model to me. Now that he’s down, I’m in a position where it’s time for me to take over and he’s going to be, you know, lifting me up again – just from a different perspective.”