Home > Notre Dame Football > Let’s Take a Look at What Else Isn’t in the NFL, Gary Pinkel 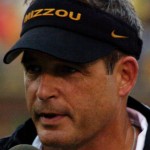 Typically, when someone takes the hottest of hot takes on Notre Dame Football, it is for clicks/eyeballs to a publication. On occasion, we are ever so blessed to witness a coach release such a take. If we are incredibly lucky, the coach that decides to open their big mouth will also be one that really hasn’t accomplished much in his career.

/points to the sky and gives thanks

For those that aren’t aware, Gary Pinkel is the head coach of the Missouri Tigers. You may recognize the Tigers from their previous two SEC Conference Championship appearances in 2014 and 2013. They are ever so fortunate to find themselves placed in the much weaker SEC East, despite being further west than practically every school in the SEC West. However, I can only assume the SEC wanted Missouri to feel like they were at home after moving from the Big XII North, the far weaker division in the Big XII whom they took advantage of in 2007, 2008, and 2010.

That isn’t to say every team in those divisions are/were terrible, but the path to a conference title and a BCS Bowl was certainly a much easier path than say, fellow former Big XII member Texas A&M. So, really it should be no surprise that Pinkel wishes to continue to walk this easier path with the new college football playoffs. Sure Missouri could just go undefeated (never been done in the Pinkel era) or focus on winning a conference title (also never been done in the Pinkel era) and make their case then, but throwing Notre Dame in the mix makes a lot more sense.

Now, I could spend a whole post comparing Notre Dame to Missouri. I could point out that since Missouri joined the SEC they are 1-10 against opponents that finished the season .500 or better (h/t). I could mention that, last season, they lost to Indiana, a team that finished 4-8, at home. I could point out that Missouri will play less power five schools than ND will this season (h/t) in a schedule that will also feature the FCS.

However, that isn’t the standard that Pinkel has laid out before us. He is looking to the NFL for guidance in this argument. So let’s take a look at what else isn’t in the NFL:

So what have we learned today? Using the NFL as your guiding light for a terrible argument is about the dumbest thing that you could possibly do.