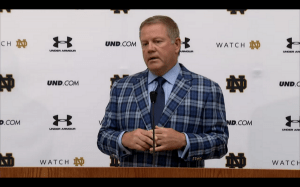 The public and constant evaluation of the head coach of Notre Dame football might as well stand with death and taxes in the certainties of life. It comes with the territory and, in this day and age, provides easy fodder for spilling internet ink on blogs, forums, and social media.

However, just because this fruit hangs low doesn’t mean it isn’t worth taking a look at. Looking at a coach’s progress and/or expectations is a solid health check for the program in both its current state and the future. The higher the standard, the better the program.

Since the time that I started my Notre Dame obsession, the Ty Willingham years when I walked onto campus in 2003 season (yeah, I didn’t even get to enjoy 2002…), to now, I have learned that there are two absolutes to this little exercise:

In my opinion, the definition of mediocrity in regards to ND football is the #1 argument among ND fans. It’s also the #1 thing that has college football fans around the nation ready and willing to laugh at us once they claim to see or hear an Irish fan proudly setting an absurdly high bar, usually with a specific win number attached to it, as their definition of mediocrity.

And, to be honest, using the number of wins as the sole measuring stick every year seems to be a fool’s errand. Schedules and their difficulty are fluid entities and thus so should the number of wins expected on an annual basis. Further, who the wins and losses come against should matter. For example, beating LSU in the Music City Bowl was a fantastic win, but that doesn’t wash away just how bad the Northwestern loss was.

Or, to put it another way, think of every argument that we’ve use against other teams and their inflated win totals when debating rankings. It cuts both ways.

Rankings, as volatile as they can be, are likely a better standard to judge a team and its coach. In fact, when Bill Connelly of SBNation did his preview for Notre Dame, he did so with the title of “Notre Dame football has no excuse to finish outside the top 20” instead of assigning a win total. Basically, it’s asking the audience to judge Notre Dame’s potential as one of the 20 best teams in college football, rather than making the assumption that a 9 or 10 win season gets ND there.

And with practically every starter returning for Notre Dame in 2015, Bill’s standard of a top 20 finish might actually be something of a low bar for the Irish to clear. Sure, Malik Zaire, with only one start at quarterback under his belt, is a huge wildcard for this team, but then again, so was Everett Golson in 2012. Now, I’m not saying Zaire should go 12-0 (after all, he doesn’t have a veteran like Tommy Rees as a safety net), but I am saying that I expect that Brian Kelly is true to his “next man in” mantra and can recruit quarterbacks in the same caliber as Golson and results shouldn’t see a major drop off.

Even with a rookie QB, the offense has an embarrassment of riches in their two-deep. Will Fuller should have himself a whale of a season with opposing defenses needing to worry about the new dynamic that Zaire brings to the run game with Tarean Folston and Greg Bryant in the backfield. The offensive line brings back 67 career starts and, thankfully, zero need to thrust a true freshman into the two-deep this season.

While the offense has plenty of weapons, Brian Van Gorder’s defense is the bigger question mark. It’s almost impossible to judge that unit’s performance last season, an absolute collapse that followed incredible early success. That collapse, however, was triggered by practically everyone getting injured. The injury situation became so comical/sad, that no one would’ve been surprised if Kelly pulled someone from the stands to play LB last season just to get a warm body in there. Still, even with all the questions surrounding the defense, with the return of KeiVarae Russell to the secondary, coupled with the 2014 starters coming back healthy, you would think that situation will never get to the lows that it saw last season.

So with all that being said, for me, judging Kelly boils down to two huge factors:

And as far as the results in the rankings, here’s how I see it and where I see Kelly’s future in each scenario:

Yes, you can bookmark this post and throw it in my face later if it looks like I start to backtrack if things go south. Simply put, I have high expectations for the Irish this season despite new QB and questionable defense concerns and it ain’t just because I’m looking at everything with blue and gold glasses. This team is absurdly talented and I cannot wait to wait them kick off against Texas in September.

Agree? Disagree? Let me know how you see it.