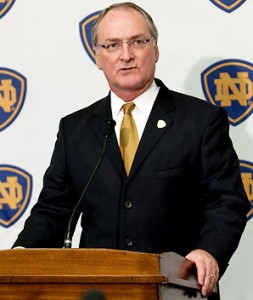 Yesterday, Jack Swarbrick had an interview with CBSSports.com’s Jon Solomon after an IMG Sports Network panel and it is most definitely worth your time to read. In it, he supports of paying student-athletes for use of their image and likeness. Now, before this causes a freak-out moment in thinking that Swarbrick is about to lead college athletics into a downward spiral, it is important to note that he isn’t suggesting student athletes should become similar to minor league players, but rather putting them on the same level playing field as their fellow students.

“You’ve got to stay grounded in this analogy to other students,” Swarbrick told CBSSports.com. “There are students on campus making a lot of money because they’ve launched a business. A classic example: Students are making great money in some internship, and I’m telling my football players they can’t leave for the summer. Where’s the equity there?”

But only Swarbrick cut through the usual rhetoric. Swarbrick’s point: College sports brought this on itself with rules that differentiate athletes from the general student body, such as not allowing athletes to make money off their own name.

“If we could get ourselves more grounded in the notion we wouldn’t have these problems,” Swarbrick said during a panel. “If we’re going to do something different than for the normal student, the bar for doing that ought to be really high. If we had that in place, we never would have had a limitation on the cost of attendance because a merit scholar doesn’t have that limitation. We did that for athletic reasons.”

“But if our standard had been what’s the rule for other students, capturing name, image and likeness outside team activity, the musician at school doesn’t have that limitation. I’m not sure why the student-athlete should, either. I don’t find it inconsistent at all to say we need to get ourselves grounded back in that. I think it would contribute to reducing so many of the problems we have which really spring from this situation we created when we say they’re not going to be the same as other students.”

Swarbrick is absolutely correct. Many of the bylaws are more concerned with attempts to create a level playing field on the field rather than ensuring athletes retrain their amateur status.

Full cost of attendance, as an example isn’t in place for student-athletes due to an idea that some schools can’t afford to do so as easily as others or even at all. Therefore, schools that can afford to do so, would have an unfair recruiting advantage. In using this logic, however, student athletes are indeed being held to a different standard than a non-athlete. A student on merit scholarship can potentially receive a full cost of attendance, but if they turn down a school that doesn’t offer it, no one cries foul there.

To give a different, non-financial example, I am not allowed to publicly comment on any potential student athlete during the recruiting cycle until they either enroll early or sign their letter of intent on signing day. The fear is that boosters, which I qualify as, could use such public comments as a means to recruit and entice players to go, or stay away from, a certain school. However, I can talk about any other “regular” high school student that isn’t involved in any form of athletic recruiting if I wish.

Again, there is a line drawn between student athletes and students. Some of those lines, like my last example, are ridiculously blurry as well as seemingly almost every bylaw has exceptions and “gotchas” that are too numerous to fully explain here. Again though, it is important to note that these rules only pertain to those wishing to play sports for their school.

Swarbrick is getting to the heart of something that I wrote in the offseason. My main argument behind that piece was that the focus has shifted away from the actual education of the student-athlete. As soon as the focus shifts away from remembering that all of these athletes are indeed students, all kinds of problems emerge. Paying them simply for playing a sport is equivalent to trying to fix a major structural problem with duct tape. The divide between student and student-athlete grows, education is further deemphasized in the process, and the problems plaguing college athletics are never fixed.

Swarbrick is getting to the heart of this very problem, but in a much different way and in a different, post-O’Bannon world. Swarbrick isn’t suggesting the duct tape solution, he is actually looking to solve the problem and from a Notre Dame mentality, it makes all kinds of sense.

The University prides itself on having their student-athletes living in dorms until their senior year. They are a part of the fabric of the student body who aren’t secluded in a fancy, athletes-only dorm. They aren’t steered towards academic paths solely in place to keep them eligible. Sure, being a student-athlete does allow for some benefits many students do not have access to, but the same could be said for any student on a merit scholarship or a student that applies for, and gets accepted, into certain programs that student athletes don’t have the benefit of free time to do (like studying abroad).

That isn’t the current climate of college sports. Swarbrick sums it up best at the end of the article:

“It shocks me today when I’m at an athletic event and I hear students boo a fellow student. That never happened a decade ago. They view it like they’re not our classmate. That’s what we’ve got to get away from. If we’re just going to be minor league sports, we should leave that to minor league sports.”

That perfectly sums up the situation. The athletes aren’t seen as classmates or future fellow alumni, but rather people expected to do a job on the field. The further ingrained this mindset becomes, the further college athletics will deteriorate.

The final thing I want to point out is how Swarbrick proposes to solve this issue of paying for image and likeness:

Swarbrick said college sports could manage a group-licensing approach for athletes to be paid immediately, not through deferred payments as the O’Bannon ruling states.

“You need a commercial validation of it,” Swarbrick said. “It can’t be us, it can’t be Joe Fan who’s going to say I’ll pay you $50,000 for an autograph as long as you go to my school. You’ve got to avoid all of that. But you could have a group-licensing approach and said, OK, this group licensee can do a deal with EA Sports for student-athlete image and likeness, and we’ll go to EA Sports and negotiate it for all of the student-athletes. Here’s what it’s worth if you wear the jersey in the EA Sports video and here’s what it’s worth if you don’t. You get a market read on it and you distribute it based on the way all group licenses work.”

Swarbrick said he believes there’s a misperception that college athletes have a lot of unrealized value. Most players possess value because of the university jersey they wear, but a market test would allow those figures to be determined, Swarbrick said.

Again, this isn’t the “just pay them” and be done with it solution. This is a very level-headed, rational explanation of the issue and a valid solution to solve it. Further, Swarbrick makes two very clear distinctions that many “pay for play” proponents leave out.

Firstly, boosters and fans can’t be allowed to have carte blanche to start putting athletes on a payroll. That’s a Pandora’s box that needs to remain closed or college sports will indeed just become a sort of minor league or semi-pro system.

Second, Swarbrick rightly states that a lot of the value these student athletes hold is due to the school they represent. The larger and more well-known the program, the greater their potential value. Think of it this way: a Notre Dame diploma speaks volumes in the professional world and holds some serious weight when compared to many other institutions. The same logic works with athletes.

For a football example, look no further than Joe Flacco. Flacco’s college years came at the University of Delaware, a school in the FCS. He was drafted into the NFL largely unknown by even some of the most rabid college football fans. As best, they became aware of his name due to reporting leading up to draft day. After his 2012 Super Bowl MVP, Flacco signed, what was at the time, a record high contract for an NFL QB.

Flacco wasn’t some kind of late-bloomer. This is a guy selected 18th overall in the NFL draft. Johnny Manziel was selected 22nd overall, four slots later, and he’s been exhibit A in many arguments for the worth of college athletes. However, if “Johnny Football” doesn’t wear the maroon of the Aggies and doesn’t get to do battle with SEC powerhouse Alabama for a Heisman moment, and be a part of a team good enough to win that game, his potential market value plummets. There wasn’t a soul concerned about highest drafted Blue Hen off all time who now has a full line of “is he elite?!” memes.

Overall, I’m happy that it is Jack Swarbrick breaking the ranks of the usual AD rhetoric here. If there is anyone that I would actually trust to navigate these tricky waters and not destroy college sports in the process, it’s Savvy Jack. 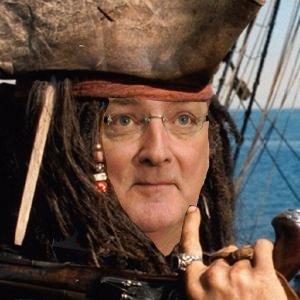 Credit to @IDtheMike (aka MQ)