Usually, the Roundup never takes a bye week, but this time it must.

Sadly, my day job being incredibly busy, plus family being in town took up far too much time this week. Add on to the fact that I don’t have an opponent to make fun of this weekend and I’m bringing a big bag of nothing to the Roundup table this week.

Instead, we’ll just throw out the usual links, pick some games, and suggest some booze and enjoy a relaxing weekend in which Notre Dame football won’t drive us crazy.

I’ll be back full-force next week to poke some fun at our Mormon opponents, but for now, it’s time for a breather.

This is only finding its way in the Roundup because it’s a big story. There’s no snark here or judgement being made, but Jameis Winston is involved in a sexual assault case. It’s too early to jump to conclusions, Winston isn’t talking to police and his lawyer says he has an alibi. I’d definitely suggest letting this one play out.

Art Briles inked his Weis extension. Sorry, knee-jerk reaction to a 10-year extension when a lot of high profile jobs are going to open up.

GUESS WHAT DAY IT IS? Kudos for the Gieco parody, ND Compliance.

Pissing off your neighbors because you can’t control yourself at a bar: Pure Michigan.

And now your moment of zen… Via

Originally, I said I’d only give Bayou half a point for hedging his bet; however, he’s the only one that even considered that Notre Dame would lose this one. Not only that, he got the margin of victory dead on for Pitt. He’s getting the full point this week.

The standings are updated below and we’ll be back with predictions next week.

This week, I’m channeling The Dude. F*&k it, man. Pass the Caucasian. 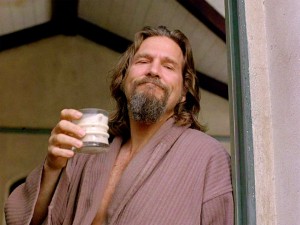