As we make the journey ever closer to the Notre Dame – Oklahoma match up this weekend, I thought I’d delve a little bit into Oklahoma football lore (we all know the ND lore, here’s a little Sooner lore). Today I’m going to examine the forgotten man of Oklahoma Football: Jim Tatum. 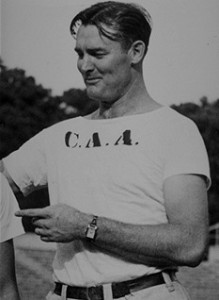 Jim Tatum became the head football coach for the University of Oklahoma football team in the spring of 1946 and in chaotic fashion left an immediate mark on the Sooner football program. During his first season at Oklahoma he won a Big Six Conference Championship, defeated North Carolina State in the Gator Bowl 34-13, paid players in cash, overspent the Athletic Department budget by some $60,000 and got the Athletic Director fired (are you taking notes, Jack Swarbrick?). Quite an entrance!

He also recruited nine All-Americans: Wade Walker, Stan West, Darrell Royal, Jim Owens, George (Junior) Thomas, Buddy Burris (a three-time All-American), Jack Mitchell, Plato Andros and John Rapacz. If there ever was a way to earn the love your fan base, it’s to raise the bar with great recruiting.

Even more important than his nine All-American players was the hiring of Assistant Coach Bud Wilkinson. Wilkinson is credited with building the OU football dynasty of the late 1950′s, but he could not have done it without the ground work that Tatum laid before him.

In 1946, Coach Tatum’s first year at Oklahoma, OU had a record enrollment of 10,126 students, almost three times as many students than the 1944 enrollment. The war was over, and many veterans were headed to college to take advantage of the G.I. Bill. A great many of these returning vets were football players with their full eligibility ahead of them. Some of them, who had been drafted in the middle of their college careers, still had eligibility remaining. This created a recruiting bonanza for college football coaches.

Jim Tatum had been hired by Oklahoma to build Oklahoma into a great football team, and that is exactly what he set out to do.

Jim Tatum was born on July 22, 1913, in McColl, South Carolina. He was one of nine children, and he followed in the footsteps of four older brothers before him who all played left tackle. Tatum played college football for Carl Snavely’s North Carolina Tarheels. He was a towering young man, standing 6’3″ tall and weighing in at 230 lbs, and was an All-American as a senior. After he graduated in 1935, he was hired as an assistant coach at North Carolina, and when Coach Snavely moved on to Cornell the following year, Tatum tagged along.

In 1940 Tatum decided to return to his alma mater, North Carolina, to serve as an assistant coach to Bear Wolf. When Wolf enlisted in the Navy just before the ’42 season, Tatum was promoted to head coach and led the Tarheels to a 5-2-2 season. The following season he was also in the Navy and coaching the Iowa Pre-Flight football team along with Bud Wilkinson and Don Faurot.

Oklahoma’s director of athletics, Jap Haskell, had known Tatum during the war and had seen his teams in action. In large part, on Haskell’s glowing recommendation, Dr. George L. Cross and the OU Board of Regents decided to hire Tatum as their new head coach.

Cross, who did not care for Tatum much personally, began to regret this decision almost immediately. He was much more impressed with the young, charismatic Bud Wilkinson and would have preferred to have him as the Sooners’ head coach. Eventually, Cross grudgingly admitted that Tatum had “unusual organizational talent.“ He, not unlike Notre Dame head coach Dan Devine, had a great gift for being able to hire a great supporting cast and delegate appropriately. Cross later wrote, “He called on Wilkinson to do most of the actual teaching during the squad meetings. His genius appeared to lie in his ability to select personnel, players and coaches, induce them to join his team, and then effectively organize their efforts.” 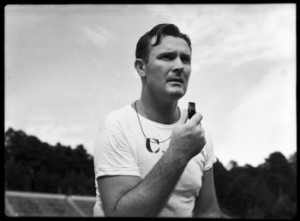 During Tatum’s inaugural season at OU, the Sooner’s finished the year with an impressive 8-3 record, which included a 34-13 victory over North Carolina State in the Gator Bowl. Tatum had few problems on the football field. However, he had major money issues off the football field. He spent so much money his first year as head coach at OU that he almost bankrupted the Athletics Department.

Tatum lined up several of his star players with a sponsor or “sugar daddy.” In return for helping out the players, the “sugar daddy” was given privileges to be in the Sooner dressing room after games and visit with the player. At this time, the sponsors often slipped a twenty-dollar bill into the player’s pocket before they slipped out the door. They also bought clothes for players at Connolly’s Men’s Store in Oklahoma City. Tatum may have worked his players hard on the field, but he made sure that they were rewarded handsomely.

When Cross was reviewing the Gator Bowl expenditures, he found $6,000 in expenses that he could not account for, that were merely listed on the reports as “expenditures.“ Cross then put two-and-two together and figured that Tatum must have bought gifts for the players, even though Tatum had been told not to because it would be a violation of Big-Six rules. After Cross spoke with a few players and did the math (fifty players at $120 each equaled $6,000), mystery solved.

Cross confronted Tatum on these “expenditures”, and Tatum admitted that he had indeed given money to the players. He then went on to proclaim to Cross that this was a perfectly acceptable thing to do, regardless of the fact that it violated Big-Six rules and was completely unconcerned with the fact that these players could be declared ineligible.

In the midst of all this turmoil and controversy, Tatum decided to resign and left to become the head coach at the University of Maryland. After his departure from Oklahoma, Cross investigated further into the financial affairs of the Athletic Department and found that Tatum left in his wake a deficit in excess of $60,000. It appeared that Athletics Director Jap Haskell did not know about Tatum’s excessive spending, or perhaps he just turned a blind eye to it. The Board of Regents promptly let Haskell go. How about that. The man who got Tatum the job, got fired in the end.

Tatum’s move to coach the Terrapins was a smart one indeed. In nine years as head coach, his Terrapins won 73 games, lost 15, tied 4, played in five bowl games and at one point had a 19 game winning streak. Tatum’s 1953 squad was ranked number one by all the major wire services, and he was voted “Coach of the Year.”

A biography of Tatum at Time.com explained, “Still, all was not roses for Tatum even at Maryland. The university was criticized for overemphasizing football. When Dr. Wilson Elkins, a Rhodes Scholar and one-time University of Texas quarterback, was named president in 1954, and set out to raise Maryland’s academic standing, Tatum got itchy feet.” Two years after Elkins’ arrival, Tatum was back at the University of North Carolina.

North Carolina, however, did not welcome Tatum back with open arms. The North Carolina student paper, The Daily Tar Heel, called Tatum “a parasitic monster of open professionalism.”

When Tatum left Maryland, he commented that, “I’m going back to North Carolina to die.” Little did he know how soon this would actually happen. At 10:40 p.m. on July 23, 1959, the day following his 46th birthday, Jim Tatum died. His doctors said that he had contracted “an overwhelming virus infection,” which had spread throughout most of his body. Uremic poisoning and other complications set in and hastened his death.

Jim Tatum may be a forgotten man of Oklahoma football lore, but he certainly did play a significant role in the Sooners’ rise to football prominence.

Several articles from the archives of The Oklahoman and Sooner Magazine.

Previous Post: « Breaking Down the Run/Pass Balance
Next Post: Friday Roundup: The “Bring Your Green Hat (and Shirt)” Edition »