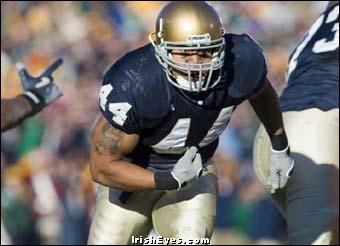 Loyal Readers, it is with a heavy heart that I inform you that Asaph Schwapp, former Notre Dame Fullback and 2010 graduate, has passed away after a battle with non-Hodgkin lymphoma at the age of 26. Schwapp was diagnosed with this cancer last year, and his former coach, Charlie Weis informed Twitter this morning that things weren’t looking good:

Just after 3pm EST, multiple players and media outlets confirmed that Schwapp had passed on via Twitter.

It is unreal to think that a man just two years my junior is no longer with us.

It doesn’t seem that long ago that I saw a beast of a freshman walk into fall camp when I was a student manager. I don’t have too many personal stories about “Ace” from those days, but he was definitely a great guy and well loved by his teammates.

But really, there isn’t too much that needs to be added. Notre Dame has lost one of her loyal sons way too soon.

Update: Below, some of Asaph’s former teammates, media, and Weis bid their farewells.

RIP Ace. You will be greatly missed. Taught me so much w his words and actions. Very sad day. Prayers for him and his family.

Lost a good friend and an even better man today in Asaph Schwapp. Keep his family in mind today #ND

Forever in OUR hearts Asaph Schwapp.

Tough to hear news of Asaph Schwapp passing away today. An incredibly strong and kind human being. R.I.P.

So sad to hear about the passing of former #NotreDame FB Asaph Schwapp, 26. Guy was just a total champ, plain and simple. Rest in peace.

Asaph told me last July he'd just benched 400 lbs & squatted 500 — roughly 5 mos. after getting a lymphoma diagnosis. Like I said, a champ.

#RIP Ace Schwapp. Such a sad day, the world lost one of the greatest guys I ever knew. Love you brother, keep looking after us up in heaven.

ND grad and former ND FB player Asaph Schwapp passed away today at 26 from lymphoma, as sincere a person as I have ever met gone to soon.RIP

My friend and former ND teammate Asaph Schwapp passed away after a battle with cancer. To say Ace was one of the most upbeat, caring, and

strongest people I know would be a drastic understatement. I want everyone to know how good of a man the world lost today. Love you buddy.

Looking for the words and cant find them. it just hurts. Ace was one of the absolute best guys I've ever known. Gone way too soon.

As just a young freshman at ND – a senior showed me the ropes and took me under his wing. Ace, I'll… http://t.co/uR9YCuQddy

Going against them bc ace would come either lead blocking or something and would just knock anyone or anything in the way out!! #ripbigace

Sad news today. One of my all time favorites passed. Asaph was a fan of our team and a friend to my children. God bless him.

Only interviewed Ace a few times, but that was enough to learn what a class act he was. Prayers to his family. #RIPAce

Previous Post: « Hint of Change Sparks Panic and a Rethinking of Architecture as We Know It
Next Post: Friday Roundup: The “It’s All Gravy” Edition »