Home > #HLSRecap > Friday Roundup: The “And Your #HLSRecap Madness Winner Is…” Edition

The finals of the #HLSRecap Madness tournament appeared to be over yesterday. It looked like Oak’s Louis Nix III inspired tweet easily took the day, barely holding off another furious trademark comeback by cwlik with the aid of Nix getting in on the act himself by retweeting this plea from First Down Moses.

However, upon a quick inspection of the voting logs, I noticed some voting irregularities on both sides. It’s only slightly suspicious when several votes pour in from the same IP in a matter of seconds, so I declared Oak an unofficial victor until I had a chance to properly check all the votes.

After further review, I am ready to declare a winner: 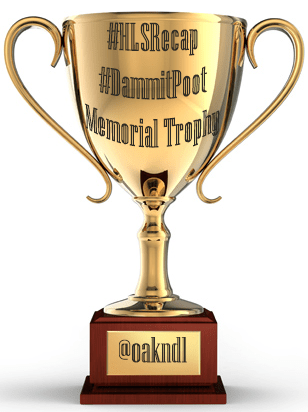 For a look at Oak’s celebration, be sure to check out this exclusive footage direct from Fighting Irish Digital Media HQ.

For this edition of the Roundup, we are going to take a look back at this tournament. Think of it as the #HLSRecap’s version of “One Shining Moment”.

*Actual trophy may or may not exist in the future.

Many, many thanks to the Subway Domer for the initial blessing. If you enjoyed this tournament, you should be sure to tune in to Subway’s Twittermania during football season (which Oak also won…). Sorry we failed to include any of your tweets, Subway. Seriously, our bad. On that note…

Damn y’all take this Twitter thing seriously. So what started as a crazy “what if we do this idea” turned into “this might be fun, let’s do it.” Then, #HLSRecap was about to kick off and Irish Elvis and I were all “uh…crap, we need to select 64 tweets” and then the next morning everyone was all “OH MY DEAR GOD YOU HAVE WRONGED ME, YOU HEARTLESS BASTARDS!”

Next year, expect the cut to be tougher. The selection committee has heard your cries of pain. #HLSRecap 2: Electric Boogaloo is going to be a very carefully curated selection. You’ve been warned. Bring your A-game.

Our polling plugin sucks. I have no idea what caused so many voting issues. People couldn’t vote, people found ways around the safeguards for stuffing the ballots, and results weren’t being updated properly. One way or the other, I’m fixing it. Apologies for any voting headaches and thanks for fighting through it.

Yes, we named the trophy after Poot to troll him. See, you found your way into the tournament after all!

And now, to celebrate Oak’s victory, and even Poot getting the trophy named after him, I will now make fun of their favorite baseball team: the New York Yankees.

Look, I’ll be the first to admit I’ll go into the “mainstream” in this section, but at least I own it. WTF is that?! And since when is hard cider a beer?