This morning, Brian Kelly had his usual post-practice presser. It included most of the usual: injury updates, thoughts on position battles, and even a bit of talk about pushing to have his starters out on special teams like Alabama did.

Near the end of his presser though, a mention of secondary depth caught my attention. Specifically the ability to now do something we couldn’t do last season: use the “Dime” package. In this age of the spread, the ability to use this package is vital and it’s absence in 2012 makes the performance by the ND secondary that much more impressive.

Let’s dig deeper into this defensive concept, but feel free to watch the entire presser below before we move on:

If you look back at my 3-4 Defense Primer, you will see a mention of the “Nickel” package at the bottom. In that diagram, I show a single-back look, with three wide receivers and a tight end, which is also called 11 personnel (first number is for number of backs: 1, second number is for number of TEs: 1). While that lines up quite evenly, what happens when the offense goes into a 4-WR or 10 personnel look and all we can do is line up in Nickel as shown below? 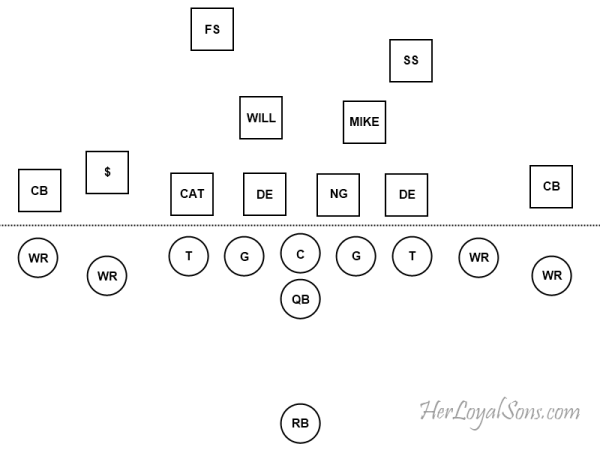 With this alignment, the offense has just created a host of problems and potential mismatches.

In man coverage, either a LB or a safety will be assigned to one of the WRs. A matchup of LB vs WR is never desirable for obvious speed reasons — even swapping out the WILL LB for a DOG (coverage) LB in this situation won’t solve that. Bringing a safety down into coverage can also cause it’s own issues, as running a Cover 2 (two DBs playing a deep zone) becomes practically impossible. This would then leave a single safety out deep in Cover 1 and, if he bites in the wrong direction, the potential for a one-on-one deep bomb emerges.

Of course, the defense can counter with a zone. With this scheme, each man dropped into coverage only covers an assigned area of the field. Generally, the goal of zone coverage is to keep the play in front of you and not give up a play deep. However, mismatches will still exist in coverage as there will be “holes” or “soft spots” in any zone. The quarterback must properly read these coverages and throw into the proper window or exploit the best mismatch. A misread by the QB can likely mean a tougher throw or, in some cases, a QB can completely miss seeing a defender and throw it right at him (see: Denard Robinson to Manti Te’o).

A solid pass rush from the defensive line can ease both of the problems above. A WR might not beat his mismatch man coverage in time or a QB might not be able to read a zone quick enough with a pass rusher breathing down his back. Notre Dame relied quite heavily on that throughout the season; however, the downside is that if a good QB is given all day long to throw, your defense will eventually be picked apart.

To counter the 10 personnel and reduce such headaches, a defense can use the Dime package: 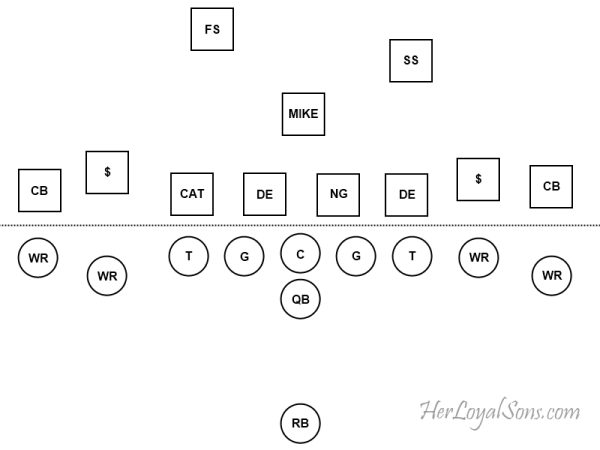 (Note: The line could also look like a traditional 4-3 front with 2 DEs and 2 DTs. The NG could also be swapped out for a more agile DT. Since there are loads of options, I just kept diagrams consistent.)

Now, the defense has a CB available for every WR on the field. There is no more obvious mismatches in man coverage as every CB can cover a WR. Zones are now more effective as well with the additional speed on the field. Finally, blitzes become a better option than before. If a CB or the MIKE blitzes, you aren’t left with some glaring holes like you would be if you attempted the same thing in the Nickel.

Simply put: flexibility is back. More flexibility means options for more exotic blitzes and coverages are back on the table. The more you mix things up, the more you force the offense to read and react. Staying vanilla and simple is a football death wish.

So why did ND never run a Dime package last season?

Brian Kelly politely gave the reason as a “lack of depth” at the CB position, but what he really meant was that the Irish didn’t have a 4th CB that he felt could actually hold his own out on the field in 2012. Or, to put it another way, Kelly felt that the potential mismatches running Nickel against a 10 personnel would be better than running his 4th best CB out on the field.

So we should further marvel that our depleted secondary in 2012 somehow only managed to give up 13 points to a high-powered spread offense like OU without going into the Dime. However, with secondary injuries healed and new talent from the 2013 recruiting class, Kelly feels like the Dime is back in play again, which great news for the Irish defense.