It has been over two months since the BCS National Championship game and spring practice is just a week away. And yes, memories of that game are still quite painful; however, we should never forget one of the best stories to come from that game.

The incredible story of Blake Dudley, the 14-year old boy, wheelchair-bound with Duchenne muscular dystrophy, who had a dream, wrote a letter, and saw his dream come true. 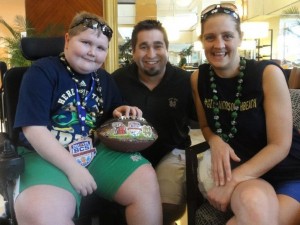 I caught up with Blake Dudley (left) with his mother, Celeste (right) at their hotel in Florida before the BCS National Championship in January

I was able to catch up with Blake and his mother, Celeste the weekend before the game. Having the chance to see the result of everyone’s generosity first-hand was easily one of my favorite experiences the entire trip.

I remember one of my Twitter followers (and it’s been so long, I forget who!) said, “I hope this thing takes off and gets so big, the kid gets to live like a king the whole trip.” Upon walking into their hotel, I believe he did. Media members were all over, official BCS decorations were everywhere, including a sand art logo proudly displayed in the beach outside.

Not only had the fundraising effort help make such accommodation possible, a local Miami reporter recognized Blake when he came into the hotel. She went to greet him and joyfully let him know that she had been praying that he would be able to attend the game.

I asked Blake if he ever thought his original letter would ever result in something so big. “No” was the simple, meek, and humble answer. It was as if he was still amazed that yet another stranger (and this time some random guy from a blog) was so anxious to ask him the obvious.

How could he have predicted just how big this would get? Southern Gameday, firmly in the corner of Alabama, helped get the ball rolling. “It was cool that they didn’t care what team I liked. They just wanted to help me get here,” said Blake of the Alabama efforts.

We here at HLS were more than happy to assist with that effort and we sent out the call in a Friday Roundup. That fundraiser, along with local fundraisers in Blake’s area, we were able to net around $6,000 total to make this dream a reality. American Airlines donated the flight. An anonymous donor even sprung for two tickets outright. With all of these efforts, Celeste was able to organize handicap accessible seating for Blake, a third ticket for his brother, the hotel stay, a much needed handicap accessible van, and even money leftover for souvenirs to remember this incredible trip.

I asked Blake if there was anything he wanted to relay to all those that helped out in this monumental effort: “Just thank them that I got to be here. They helped give me the money and all that so I could be here.”

The only part of Blake’s dream that didn’t come true was his prediction. It started neutral and simple with a “whoever wins it’ll be by seven.” In the end though, he couldn’t help himself, blurting out “but Notre Dame’s gonna win” before I could halt the recording of the interview on my phone.

Notre Dame may not have won the game, but Blake sure did.

I am incredibly proud that HLS was able to play a part in this effort and I would definitely like to extend my own thanks to anyone that donated and helped spread the word.