Home > Notre Dame Football > What It Means to be #1

If you can, for just a minute, forget about next weekend’s game. Forget about the potential for a Mythical National Championship game. Forget about Bama and the SEC and USC and the Ducks and the K-Staters. Focus for a short time on this: Notre Dame is the #1 Football Team in the Nation. And think about for a second what that means.

Here’s what it means to me.

First, the obvious. It means we’re considered the best team in the country. A bunch of people that are barely qualified and a bunch of computers that are pretty qualified (IMHO) have put us there. That’s the reality of how it’s done and the fact is that since it’s been done that way, we’ve never before been #1. However you feel about that process – and there are many with many feelings – to date this system has always put some other teams (often many) above Notre Dame. No longer. It’s an amazing, unbelievable achievement, and it’s something the entire program and fanbase should be wildly proud of. Notre Dame is ranked ahead of 119 other FBS teams. ND is the highest ranked team in the land.

Second, it means that academic and moral standards need not be jettisoned to have this kind of success. Chip Kelly is a hell of a football coach, but not even 2 out of 3 of his players get a degree. Urban Meyer can win football games by coaching kids that end up in jail as often as the end zone, but I don’t ever want a scumbag like that leading my Irish. Notre Dame is #1 in the country in football and #1 in the country in GSR, with almost every player graduating. LEARNING and ON-FIELD success are not antithetical. Sure, it’s harder to do it this way. It’s a tougher road. But that’s why we choose it: because we’re Notre Dame, and per BK: “Nobody does it like Notre Dame.”

The current BCS top 10 and their current GSR%:

This isn’t even close.

The third thing that this means is that program building is for real. Ty came in and preached…golfing. Weis came in and preached schematic advantage. Coach Kelly came in and preached program. Program program program. It’s not about a certain team or year, and it’s certainly not about a particular player. It’s about building a consistently strong identity as a PROGRAM. Instilling values and ways of doing things that get consistently high performance out of teams year in and year out. And as you can see with recruiting, a trickle-down effect occurs. The program starts to attract more and more of the RKGs that Coach wants. They come earlier, and recruit others more strongly, and that success yields more success. This is program-building at its finest, and I think it’s happening a bit more quickly than anyone really expected, but ain’t nobody complainin’.

And this brings me to the next thing that this means: Brian Kelly is the real deal. In case you weren’t on board earlier this season (because of style points or up and down performances or whatever) you must be now. Because BK has taken this program from 6-6 to the promised land in the hallowed and legendary Year 3. The light has come on for Coach and how to handle Notre Dame, and the light has come on for ND on how to handle and understand Coach. It’s a beautiful thing to know that there is competence at the head of this program. It has been quite some time. And no, he’s not perfect, and no coach is. But BK has figured out how to make it work at Notre Dame, and while we all have opinions about his plans, no one can say he DOESN’T plan, and no one can say that that plan isn’t (at least currently) working. Man, it’s nice to have a the real deal as our Head Coach!

And finally, and this is where I think the rubber meets the road for most Irish fans across the country, this means it’s possible. It’s actually possible for Notre Dame to be #1 again. Because while we all have hoped, and dreamed, and yearned for success like this, none of us KNEW it would come. We kept the Faith. We prayed. We did our best to believe. We wondered if the haters and pundits were right. We tried to smash down that little lingering feeling of doubt that remained way back in the corner of our hearts and minds. We weren’t SURE it would happen again.
But we no longer have to fear….

It’s HERE. NOTRE DAME IS BACK!

We don’t have to wake up the echoes – THEY ARE WIDE FREAKING AWAKE, and tearing the sheets off their beds and running screaming into the night with cheers and chants that resound off the hills and halls where ND fans roam.

There is no more need to seek a Return to Glory. GLORY HAS BEEN RESTORED! We need not yearn and pine for days gone by and what might have been. We’re LIVING IN THE GLORY NOW.

There is no more need to wonder, to doubt, to question…NOTRE DAME IS THE NUMBER ONE TEAM IN THE COUNTRY. We have climbed that climb. We have fought that fight. And we have arrived. 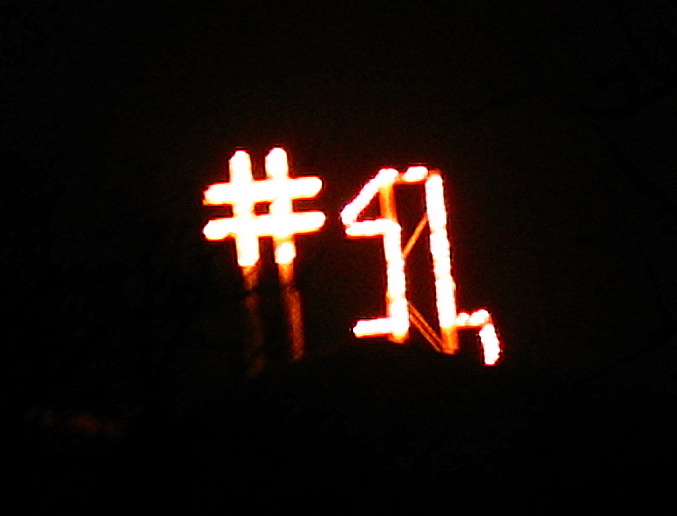