Welcome to yet another new HLS staple.

In this series, I will put aside the stats and take an in depth look at the game film. More often than not, I will be taking a look back at most recent game and highlight the plays that stand out to me–frustrating and spectacular alike. I hope you enjoyed the Blue/Gold game because, for the foreseeable future, this series will be heavy on that film until September.

For this week though, I picked out two Irish TDs that stood out to me this past Saturday. In these plays both Hendrix and Golson faced different blitz packages and were able to make solid reads for the eventual scores. 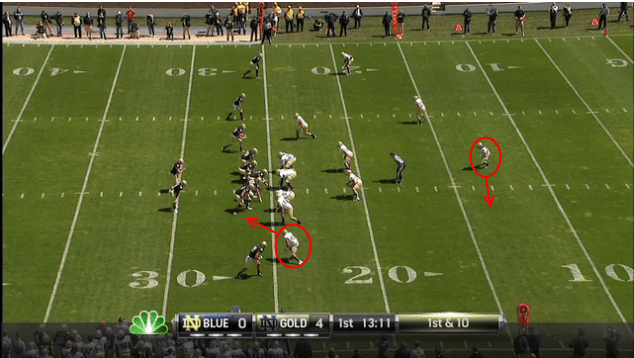 Right before the snap, the CB shows blitz and the safety begins to cheat towards Eifert. 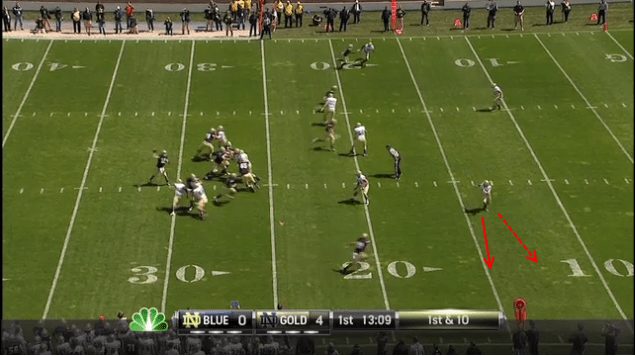 After the ball is snapped, Hendrix looks only in one direction and it’s the right one: directly at Eifert. He wastes little time in getting the ball out, forcing the safety to make a choice to either try to make a play on the ball, as indicated by the solid line, or take an alternate angle, as shown by the dotted line, in order to mitigate damage and save a TD. 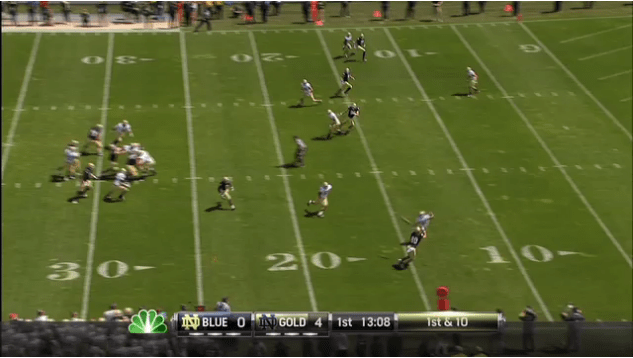 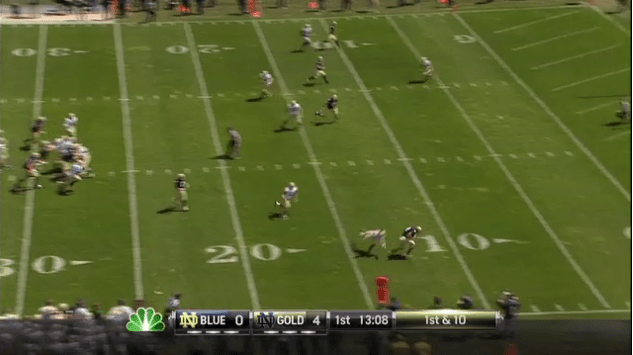 The safety decides he can actually make a play on the ball and goes for it. Ultimately, this was a bad decision as Eifert was able to slip past him; however, this doesn’t happen if Hendrix doesn’t get the ball out as quickly as he did. Had Hendrix of waited longer, the safety could have easily adjusted his angle to Eifert and the result of the play could’ve been must different.

So yes, making the right read is important, but so are timely decisions. Here, Hendrix’s quick decision forced the safety into making a higher risk play than he probably should have. 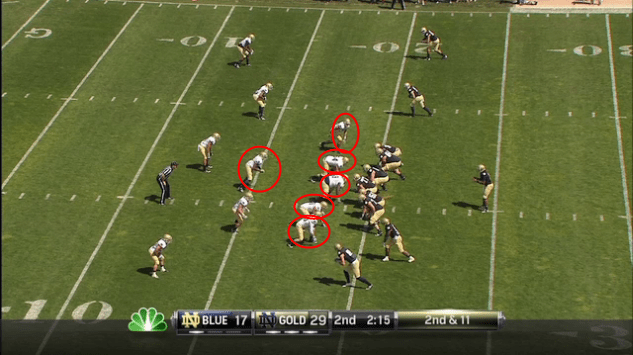 At the snap, Golson is facing six pass rushers. Five were initially showing and one of the inside LBs timed his blitz perfectly at the same. 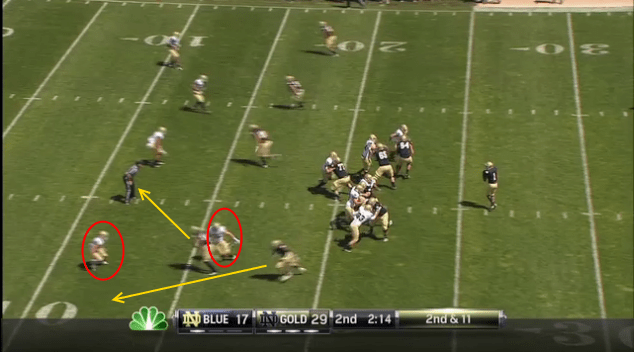 Golson takes a look at his first read towards the near sideline and sees that Eifert and Riddick only have two defenders in their area. These routes end up crossing each other so Golson waits to see how the defense will react as both receivers could end up in single coverage (with one being a huge potential mismatch with a LB), or the defenders could blow their assignments and leave someone wide open. 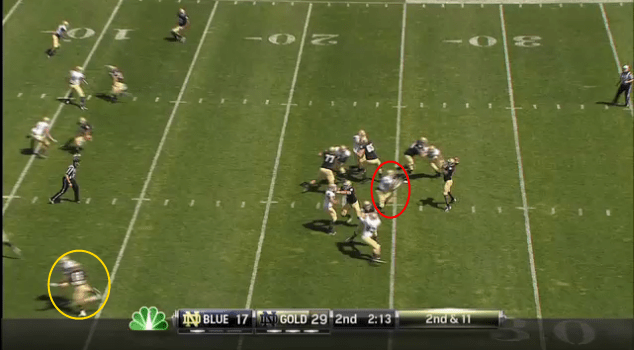 After Eifert runs out of the frame, the resulting coverage becomes clear: Riddick ends up mismatched against the LB and easily burns him. Golson, with the 300+ lbs Nix (circled) free to come after him, has waited just long enough to make the correct read and get rid of the ball, lofting it up for Riddick to make a play. 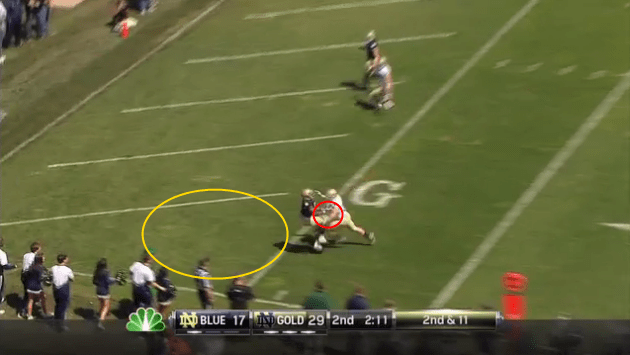 Now, here, I am going to be a bit critical. Ideally, the ball should be in the circled area in yellow. If thrown here, the worst case scenario is a harmless incomplete pass as the defender has no prayer of making a play on the ball. However, the ball is underthrown and ends up in the red circled area. While the play did end up working (and Riddick made one hell of an adjustment to make it work), the defender can actually make a play in this situation. Granted, in this case he was so badly burned that an INT would’ve been unlikely, but you just can’t afford to leave a ball there against some of the better DBs in college football. 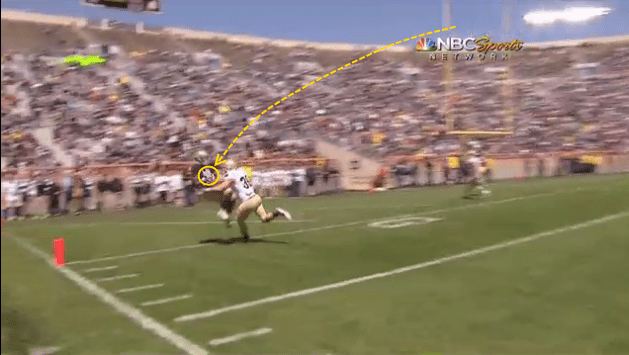 And just to demonstrate what a ridiculously small window Golson fit this in, above is an alternate angle of the catch. The yellow dotted line represents the (very approximate) path of the ball which ends up falling just over the defender’s outstretched arm.

Make no mistake, this was a fantastic play, but if you wonder why I am driving this point home, look no further than Tommy Rees. Lord knows that I am extremely harsh on him for doing this exact thing; in fact, in my pre-HLS days, I highlighted a play in which he did exactly that: 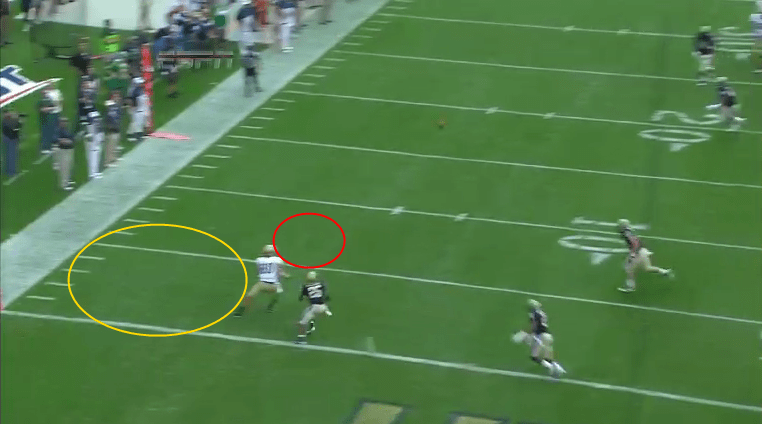 Above, Eifert is absolutely wide open and had the ball be thrown in the yellow area, it’s an easy TD. Instead, Tommy throws the ball in the red area and the previously beaten defender is easily able to pick the pass off.

Granted, Golson was under pressure from Nix who ended up flattening him on the play via a personal foul; however, I would much rather prefer for him to step up into the hit and get the ball in the correct location rather than trying to avoid contact by lofting the ball from off his front foot. In the end, this looks like a rather small blemish on an absolutely fantastic play, but as Tommy has unfortunately shown us in the past, small mistakes can turn into huge, point-swinging disasters.

And with our wide-open QB battle it could be the difference between the field and the bench.