Some of you my know me from my own blog or from my rather colorful Twitter account (which by the way, you should follow), but for those of you that do not, let me introduce myself. My name is Ryan Ritter, aka NDtex, and, as of today, am the newest contributor to Her Loyal Sons. DMQ reached out to me last week to ask if I’d consider blogging ND Football exclusively for HLS and I was very excited to accept, finally giving HLS a much needed southern presence.

As far as my background, I am a 2007 Notre Dame graduate and a proud former member of the Student Managers Organization. I worked with the football program during Weis’ first season and afterwards moved to the golf course working with our golf teams my senior year. As a manager, I learned more than I could’ve possibly imagined about football working practices on a daily basis. The program also gave me a chance to play actual full-contact football on a couple occasions for the first time in my life (I played baseball growing up).

Thanks to my time working with the team for even just a little over a year, I was able to see the game in a completely different way. In fact, I was able to flat out predict plays that we would run from the stands my senior year (in hindsight, probably not a good thing about the Weis offense perhaps?). I’ve always been a stat guy and love taking a look at the numbers behind the game, but there is no doubt that I wouldn’t have been able to throw together posts like this one as easily without that background.

So what should you expect from me here at HLS? My goal is to bring the same content that I created for my site over here to continue to make HLS one of the best ND blogs around. That means my crazy creation of the NDtex25 will be following me here (it can’t be any more embarrassing than saying Ruffer is the #1 player for ND, right?) and I will continue to bring my opinions and analysis to our program just like I always have.

Also, you should expect to see me lurking around the comments and the Sideline forums on a regular basis as well. If you haven’t been joining in yet, you definitely should get yourself an account here, grab yourself a Gravatar (because I’m lazy and like to see pictures instead of reading names), and join in.

But hey, enough of me talking about myself, let’s give this post some actual ND football content while you are here!

For me, the big story in the Purdue game (besides the zero turnovers), was the rushing attack basically having its way with the Boilermakers. As Poot mentioned in his breakdown, Cierre Wood and Jonas Gray led the way with 191 and 94 yards respectively.  Furthermore, the Irish actually had more rushing yards (287) than passing yards (264) in a victory for the first time since 2008 against Navy.

For me personally though, this game gave me a chance to really take a look at what a running game looks like under Brian Kelly when executed properly. With Rees and the QB position being such a hot topic in general, most of my focus has been mainly on the passing game. This time around though, there is very little to break down for Rees because Purude went with the very odd “leave Floyd in single coverage” defense, making his decisions very easy. That left me focusing on Wood (insert joke here), Gray, and the blocking up front.

By now, pretty much every ND fan knows that Kelly’s system is a spread offense that operates primarily out of the shotgun with a single back. These formations obviously open up the potential for the passing game, but what most Irish fans may not realize is that the running game is actually a power based attack intended to run the ball in between the tackles.

Yes, that isn’t a typo, we run a power running game from the shotgun, a welcome departure from Weis’ system in which we really only found success through misdirection and delayed handoffs, but a concept that may have many fans scratching their heads.

To see what I’m talking about, let’s take a look at a more traditional power formation, the power I. Below, is a diagram of a rather straight forward run to the weak side of the line, with the FB leading the RB through the hole. 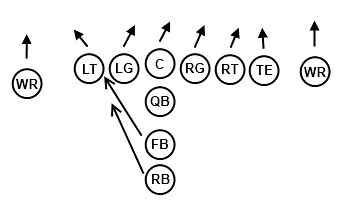 Let’s take a look at that same play in a shotgun formation. Below we swap a FB for a third WR; however, the purpose of the play is still the same: run the ball between the LT and LG. 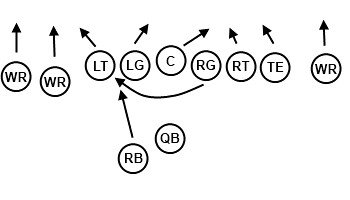 In this case though, we have no FB to use as a lead blocker. Instead, the RG pulls from his original position and leads the RB through the hole just as a FB would. Furthermore, the center now has the responsibility to plug the gap the RG leaves behind and make sure that he traps the opposing defender from blowing the play up behind the line of scrimmage, making this type of scheme rely on not just the power of the offensive line, but their quickness as well.

The overall goal of Kelly’s scheme is to have the best of both words of a passing attack that spreads the defense and a running game that can punish up the middle. If run successfully (like Purude), you force the defense to honor both aspects of your game, forcing them to spread out against all receivers, while forcing defenders back into the box at the same time.

To take a look at such a play in action, let’s take a longer look at Cierre Wood’s 55 yard run in the second quarter. At this point in the game, Purude is flat-out reeling and on this drive in particular, have given up two runs for 12 yards each. As ESPN notes, they get a bit desperate and send a safety on a blitz, opening the potential for a big play; however, that isn’t the only reason this run works so well. 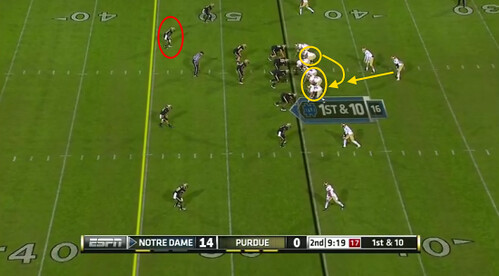 Above, we see the play pre-snap. Kelly is going to use a variation of the play that I just diagrammed above. Here, he has an unbalanced line and has moved his RT over to the left side of the line. The play will call for the hole to be created between the two tackles on the left edge and the RG, Trevor Robinson, will pull and lead Wood between the tackles. Notice how there are only six men in the box (four D-line, two LB) as the rest of the defense must spread out to defend our receivers. There will be a seventh man in the box coming in the form of a blitz, the safety circled in red. Thankfully for us though, he will blitz completely away from where the play will go. 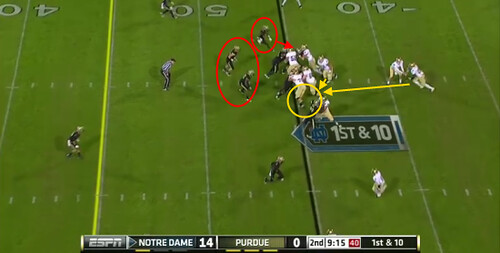 After the snap, we can see that a very nice hole has been opened. The DBs on the outside haven’t yet reacted to the run and the blitzing safety is still running in the wrong direction. This leaves only the two LBs as Purdue’s only hope to stuff this play at the line. 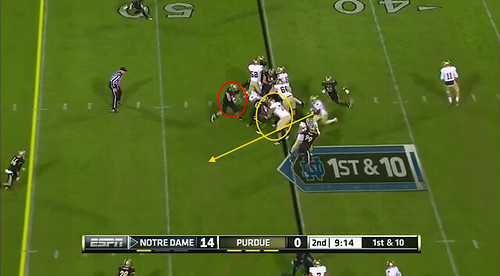 However, Robinson hits the hole well before any defender and engages one of the LBs, sealing the hole for Wood. Before Wood even hits the hole, the second level is already wide open with only one LB left unblocked, and, thanks to a blitzing safety and DBs that are too far away from the play, there is only one remaining safety in the secondary as Purdue’s last line of defense. 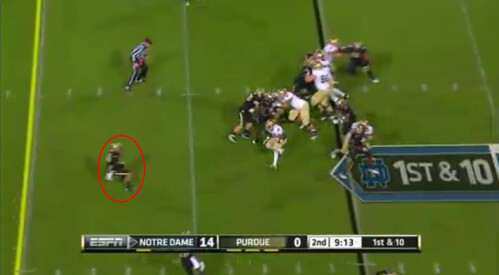 The unblocked LB has taken a rather unfortunate angle and has been sucked up into Robinson’s block. With Trevor basically taking care of the second level on his own, Wood has only the single safety to beat in the secondary to get to the endzone. 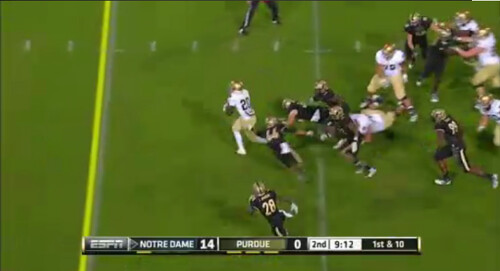 By just making a single move, Wood burns the safety and it’s off to the races for a TD.

While it sure isn’t the type of old-school rushing that many are used to, Kelly’s take on the power run game can be quite effective. Of course, it does have it’s drawbacks. For instance, if the other safety or LB over the left gap had blitzed or had a defender shot the gap left behind by Robinson’s pull, the play is dead before it ever really starts. In fact, any rush that went for a loss had these type of issues.

So as you watch the running game throughout the season, keep the above factors in mind. Our success and failures in the running game under Kelly won’t be as simple as getting a push up front, but also having our pulling linemen get to their positions quicker than the defense can react. Losing that battle will be just as important, in most cases, as getting a solid push up front.

Previous Post: « Notre Dame 38, Purdue10: A Quick Recap
Next Post: Looking Back on What’s To Come: The Falcons May Be More Sore Than Soaring »