Home > College Football > Said the BCS to Oregon and BSU…

Quick hitter here, but did anyone else have this mental image when they first heard about the first BCS rankings of the season? 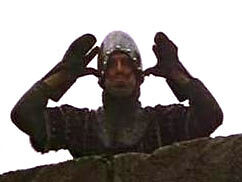