Over at Dr. Saturday, Holly, aka, “The Girl Who Blogs About College Football (OGMAGIRL!),” points out that Florida has begun work on damage control against the 24 arrests of Gator football players during Urban Meyer’s tenure.

Here’s the spin or “positive light” (my comments in italics)…

Urban Meyer also released a statement (cough – hoping to preserve a chance at one day coaching at ND – cough). The statement is such an easy target that we trust the kids at Bleacher Report can handle it, so we’ll just go ahead and paste it here for your enjoyment and then add a picture we did quite a while back to the bottom because this joint is lacking in visual embellishment lately.

“This group of players we have now are by and large a pretty good group. They are 18-to-22 years old and, like most young people, they are trying to find their way.

“It is a continual part of our program to mentor and guide our players and it is not an exact process. Although we have been very successful with most, we are by no means perfect. We are disappointed when we encounter some issues along the way, but we are going to continue to educate and teach our players.” 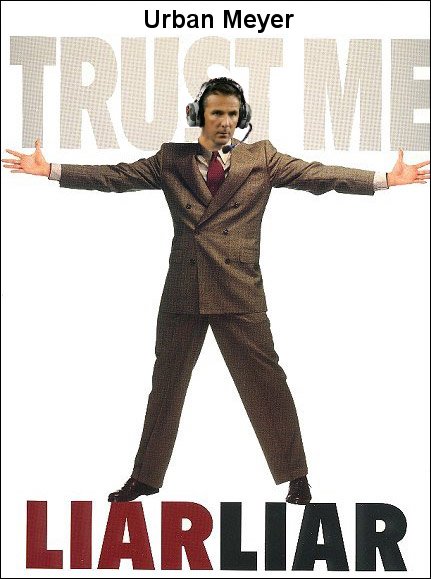 Previous Post: « Time May Be Running Out For ND To Beat Pete Carroll
Next Post: Friday Roundup: The “Interesting Week In The Death of Newspapers” Edition »