The Trojans open as 6.5 point favorites over the Irish for the Nov. 26 matchup at the Los Angeles Memorial Coliseum. 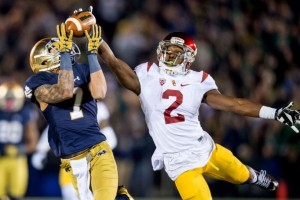 WR/CB Adoree Jackson is fast — just not fast enough on this play.

“The Trojans’ entire schedule is a meat grinder,” said FOX Sports’ Bruce Feldman. “Eleven of their 12 opponents played in bowl games last season. The opener is against defending national champion Alabama in Texas. The closest of their three non-conference games to being seen as a breeze is against a Utah State team that has won 36 games the past four seasons and is 3-3 against ranked opponents under coach Matt Wells. The third game is against Notre Dame, which like Bama should be a top-15-caliber team this fall.”

Nick Saban’s Tide are currently 10.5 point favorites in the Week 1 matchup with the men of Troy. SB Nation’s Bill Connelly projects USC will win 7.7 games this year, with the Trojans entering as underdogs against Alabama, Stanford, Washington and UCLA.

Vegas has placed 7-to-4 odds on the Trojans winning the Pac-12’s south division and 11-to-2 odds on them prevailing in the Pac-12 championship game. 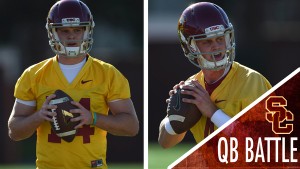 Quarterback Cody Kessler has graduated and has been placed in a real unfortunate situation: Competing for the same job with the Cleveland Browns. In all seriousness, Kessler had a pretty good senior season. He completed 66.8 percent of his passes for 3,536 yards, threw 29 touchdowns and just seven interceptions.

Although the Trojans have four quarterbacks on their roster, the competition is considered to be between junior Max Browne, a former 5-star recruit, and redshirt freshman Sam Darnold. Both have similar builds, but Darnold is more mobile and impressed coaches and fans with a strong spring. Browne has made the most of limited playing time, completing 11 passes out of 19 for 143 yards over two seasons backing up Kessler.

I’d imagine Browne gets the start against the Tide. But the Irish may face Darnold, depending on how the season plays out. 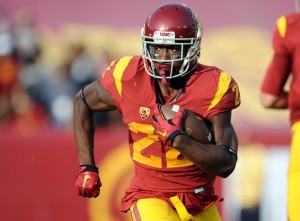 It’ll be interesting to see which tailback on the Irish squad gets the majority of carries this year. Senior Tarean Folston is returning from an ACL injury, but led the team in rushing the prior year (889 yards on 175 carries). Sophomore Josh Adams made an unexpected splash last year, rushing for 835 yards in 117 carries – a record for a freshman at Notre Dame. Folston is the considered the back that can get the hard yards on 3rd-and-2, while Adams is faster and flashier.

A similar situation is playing out in Los Angeles, with senior Justin Davis and sophomore Ronald Jones. Davis is considered the reliable one, with Jones being the flashier of the two. Both are projected to eclipse 1,000 yards, the first Trojan pair to accomplish this feat since Reggie Bush and LenDale White in 2005.

Coach Clay Helton will likely rely on his two talented running backs to get crucial yards if his quarterbacks begin to falter.

USC has one of the most talented receivers in all of college football – junior JuJu Smith-Schuster. He was the Trojans’ go-to receiver last year, catching 89 balls and amassing 1,454 yards after being targeted 135 times. USC also returns their No. 2 and No. 3 receivers from last year: junior Steven Mitchell (37 catches for 355 yards) and senior Darreus Rogers (28 catches for 289 yards). We simply cannot overlook notorious speedster Adoree’ Jackson, who caught just 27 passes last year – but torched the Irish on an 83-yard catch-and-run during Notre Dame’s 41-31 win last year in South Bend.

The Trojans can afford to have a game manager at quarterback if that individual can get the ball in the hands of Smith-Shuster or Jackson, who can take any seemingly inconsequential gain and turn it into six points.

GUESS WHO’S BACK? (CLANCY’S BACK)

Clancy Pendergast has returned from his two-year stint as the San Francisco 49ers’ linebacker coach to re-take the reins as USC’s defensive coordinator. Pendergast was, by all accounts, successful in his first time with the Trojans, leading a defense that was ranked #13 nationally in 2013. Steve Sarkisian opted not to keep Pendergast, but the Trojans’ defense struggled under the tutelage of Justin Wilcox. Pendergast is back, and with him comes a transition from a 3-4 defense to a “really aggressive” 5-2 formation that requires little thought, according to players. (Read more about that here.) 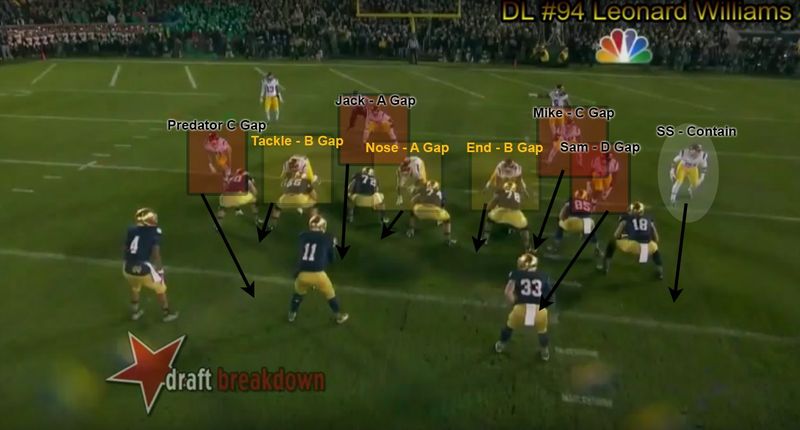 The Trojans defense has battled injuries this spring, but there’s a lot of talent ready to step up. I’ll be keeping an eye on sophomore Porter Gustin, who replaces Scott Felix at the weak outside linebacker position. Felix lost his appeal to play another year after testing positive for a banned substance. Gustin is a five-star recruit who had an outstanding freshman season – 19.5 tackles, 6.5 tackles for loss and 5.5 sacks – in 14 games.

WHAT THE EXPERTS SAY

Josh Webb, Athlon Sports: “The past five seasons for USC have been a mix of impressive, unimpressive, and impressively unimpressive. Sanity requires a wait-and-see approach with this team. … As usual, how far USC goes is largely dependent upon the players. The past several offseasons have been littered with bad press, suspensions, dismissals and growing pains for young Trojans. On the field, self-inflicted mistakes did more damage to USC than anyone not named Christian McCaffrey. The Trojans have been the kings of getting in their own way and any success they plan to have in 2016 must start with them getting out of their own way for a change.”

Bill Connelly, SB Nation: “If USC is somehow 2-1 after three games, the Trojans will probably be the Pac-12 favorite. But a 1-2 start won’t be the end of the world. USC will have a lot of time to recover before a brutal three-game stretch to finish the season. In a way, this schedule is a blessing. USC could lose three to five games while playing at a top-10 or top-15 level, and it’s so blatantly tough that all but the least tolerant USC fan would probably give Helton a grace period.”

Pete Fiutak, Campus Insiders: “8-4 might be a major disappointment most seasons. But seriously: Alabama, Stanford, Arizona, Washington and UCLA all away from home and several tough home games, get ready for the grumbling.”

Eric Murtaugh, One Foot Down: “Barring a complete collapse with Helton fighting for his job by mid-October or earlier this should be a very difficult game for Notre Dame. One of the USC quarterbacks will have enough experience in the offense by the finale and if that production is paired with Pendergast-led improvement on defense it would make sense if the Trojans are favored.”