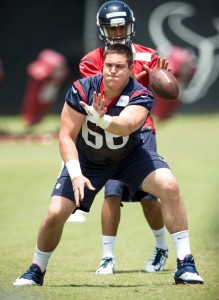 Nick Martin will likely be starting for the Houston Texans by season’s end, a blogger covering the team predicted Monday.

“He is as close to NFL ready that the draft class has to offer and he is already catching up to the curve with the demands of the position to help out in calling out pass protections,” wrote Patrick Starr of the State of the Texans blog. “The Texans need consistency and a long term answer at center. Martin could be just the player needed.”

Martin was a model of consistency during his tenure at Notre Dame, starting 26 consecutive games – and 36 overall – during his three years playing at both the center and left guard positions. The Texans’ second round pick is competing against Tony Bergstrom for the starting position vacated by Ben Jones, who is now with the Tennessee Titans. Bergstrom is entering his fourth year in the league, having played 25 games with the Oakland Raiders but started just four times.

“So far it looks like a rookie who is mature beyond his years,” O’Brien told the Houston Chronicle. “He understands the work ethic. I’m sure his older brother has helped him with that a little bit, but he has come in here and done some good things.”

Nick Martin’s older brother is former Irish guard/center Zack Martin, who made the Pro Bowl as a rookie with the Dallas Cowboys.

Starr said former Irish wide receiver Will Fuller, the Texans’ first round pick, will be “a key rotational piece at the wide receiver position.” The blogger has been impressed with Fuller’s route running and noted his ability to catch passes has improved even since his college days. Fuller may also log time on special teams, according to the Houston Chronicle.

The  Texans are now finished with their offseason program. The AFC South representatives open training camp July 29 at the Houston Methodist Training Center, across from where they play on Sundays.