Keeping it in the family’s been an increasing trend for Irish recruiting, and why not when things are going well? 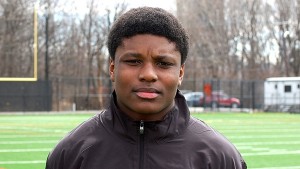 Joining the Martins and the Okwaras will be the Jones. Jamir Jones, a 3-star linebacker in 247 Sports’ Composite Rankings will get a chance to join older brother Jarron for the 2016 season.

The junior Jones committed to the Irish over the summer of 2015 and while not heavily recruited outside the northeast, he will help add depth to the linebacker position that loses Jaylon Smith, Joe Schmidt, and Jarrett Grace this offseason. There’s also no reason that Jones should need to see the field immediately letting him get acclimated to the team and spend some time with big brother during his freshman year on campus.

Part of the issue for Jones is just that he played his high school football in New York which rarely provides elite recruits a chance to line up against other elite players. Jones’ high school team won multiple state championships, a quality Brian Kelly has referenced liking in recruits before, and he also made the Semper Fidelis All-American Team.

Watching his senior year highlight video, there are a couple of things that stick out: 1) He spent a good amount of time playing on offense, although he will play defense at Notre Dame, and 2) He was just bigger, faster, and stronger than every other kid he was on the field with.