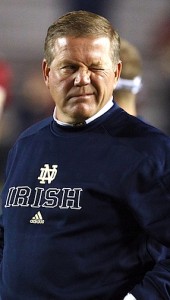 So, halfway through January, how are your New Year’s resolutions holding up?  Personally, I like resolutions that are easy to keep (e.g., continue with my commitment to procrastinating with everything in life) or just unachieveable/undesirable (e.g., run a marathon).

What about our beloved Irish?  What is going on in the mind of Brian Kelly – a few weeks removed from the Phoenix-Battle-Fiesta-Frog Bowl and near the finish line for signing day 2016?  The loss to Ohio State left many with a sour taste in the mouth. Thoughts turned to what changes BK and Co. need to make heading into the long offseason of 2016.

So what is the history of changes/tweaks that Coach Kelly has made, all in the name of improving our team’s chances, year over year?  I’ve taken a high level (read: lazy) look back and have made a list of my favorite adjustments/changes implemented by Kelly throughout the last five seasons.  None of these are grounded in fact, some of which can only be attributed to comments Kelly has made in public, few of which can be evidenced by on-field results, and the majority of which are from my fanboy fantasies and conspiracy theories:

So what does Kelly do now heading into 2016?  Some of you reading this may balk at 2013’s introduction of BVG but on paper the intention was there, Kelly wanted to #disrupt.  The most likely adjustment we should expect this offseason is with the defense under Brian Van Gorder .  It remains to be seen whether BVG is a cat that can change his stripes a bit – or if we will see more of the same in 2015 with our defense.  There will be a lot of talk about another run at the playoff in 2016 – so any changes will need to yield immediate results and Kelly won’t have too much time to plant seeds for future harvests (a la his statements re: depth in 2012).  I remain optimistic given what we have seen in Kelly’s moves over time and the results we have seen but 2016 will be telling, that’s for sure.