There is no quarterback controversy.

Brian Kelly has made that clear after each significant Tommy Rees appearance. And as much as I hated Kelly’s baseball analogy after the Purdue game, he has indeed taken a baseball mindset to what is now clearly a two-QB system at Notre Dame.

Unlike baseball though, once Rees the closer/reliever comes in, the gameplan drastically changes.

To see what I mean, let’s take a look at the last three games, throwing out Navy as Rees didn’t appear and the gameplan was drastically different than the rest of the season. Below are the number of run and passing plays run while each QB was in. I’ve done my best to count every scramble and sack as a rush for each QB.


In each game, Rees was brought in for a completely different reason.

Against Purdue, Kelly was looking for a veteran presence to run the two minute drill as well as not risk injury to his young QB whom apparently had hurt his hand the drive prior. Tommy went almost exclusively through the air as he drove the Irish to their eventual game winning field goal.

Rees’ appearance against Sparty was somewhat odd. With the game practically in hand, Kelly just had Rees come in to hand the ball off. Presumably, he was protecting Golson with the game well in hand. 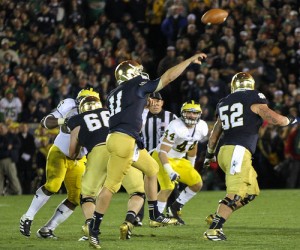 In the Michigan game, we see the greatest difference. While the Irish came out with a very balanced attack to start the game, Kelly went to Rees and went ultra-conservative, running the ball almost twice as much as Rees passed. For this game, Kelly called on Rees to stop the bleeding caused by two very poor interceptions. Rees responded with a 8-11 night featuring no INTs or fumbles.

However, while I watched the Michigan game from the stands and re-watched it again this past weekend, I couldn’t help but notice the type of pass plays that Rees was running. Every pass seemed rather short and Rees wasn’t taking any shots downfield. As I dug back into the play-by-play I noticed that Rees only had two passing plays go for 20 yards or more against Michigan, one of which was a short fade to Eifert that tacked on more yards after the catch (YAC). Digging back into the Purdue game, Rees only had a single play go for over 20 yards and that was a 21 yard strike to Toma who gained some additional YAC as well.

Adding it all together, Golson has a total of eight deep strikes to Rees’ three. To me, this seems to imply that the entire playbook isn’t available to Rees when he enters the game. When Rees comes in, Kelly wants to ensure control, minimizing the potential risk that a passing offense can create. For Michigan, this meant more runs, and, for Purdue, it was running a controlled two minute drill with short routes (even though Tommy did through up a strange 10 yard Hail Mary on that drive).

While seems to be clear that Rees is working with a smaller subset of plays, what can be read into this from Kelly’s point of view isn’t. Perhaps 2011 caused Kelly to lose trust in Rees. Perhaps Kelly has simply adjusted his gameplan to give Rees the best chance to succeed. Perhaps it is another way to ensure that his young starter doesn’t lose confidence when pulled, able to go to him and say “don’t worry, you still have the keys to the sports car — Rees has the keys to the minivan.”

Whatever Kelly’s reasons, it is clear that he is using Rees as the calming veteran presence to right the ship. Whether it is because his young QB is rattled early in a game or because he’d rather not toss his young QB into the fire on a crucial two minute drill with a bum hand. With Rees as the safety net, Kelly is able to hand Golson the keys to the sports car, the actual offense he wants to see on the field, without much worry. Since Golson is the one with the true arsenal at his disposal, it is no wonder why Kelly doesn’t hesitate in saying that he will continue to start the young QB.

The minivan that Rees is in control over may not be fancy or sexy, but it can get the Irish from point A to point B when the sports car breaks down. However, it’s hard to win a race against a Ferrari while in a minivan and if the Irish wish to keep up with some of the better offenses in college football, Golson needs to get the Irish offense on track to run at full speed.