The fall/winter season of sporting activities are all wrapping up. Men’s basketball wrapped up Saturday afternoon, and  the Men’s Hockey won the B1G Championship Saturday night in “Sudden Death” overtime. The last team to play was the Notre Dame Women’s Basketball team. The women were matched up against a former Big East foe, the Wildcats of Villanova. Villanova got to Sunday’s game by beating the SDSU Jackrabbits in OT 81-74. The win came via the three-pointer. Nova was 16-38 from beyond the arc, which equates to 42.1 percent. 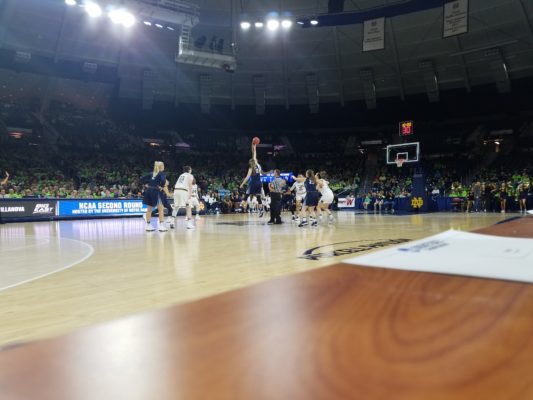 As the Notre Dame Women’s Basketball team moved into the second quarter, they picked up on a piece of the Villanova game plan. Coach Perretta commented about his game plan. “The goal of the game was to make a lot of threes, because we knew they were going to make a lot of twos.” And the Irish made a lot of twos. The twos were either by lay-up or by a jumper. Twelve points in the paint is a lot to give up. On the Nova side of the ball, their three-point shooting was taking off. Adrianna Hahn had two; and Jannah Tucker, Megan Quinn, Kelly Jekot, and Alex Louin all contributed with a single baskets from beyond the arc.

The Irish were also scoring points at will from the free throw line. A key to the Lady Irish’s success is to score when the clock is not moving. The Irish were quite successful in that stat. Ogunbowale made five free throws and Jackie Young would contribute two as well. Marina Mabrey was drawing much of the Nova defense and was not allowed to shoot the ball from deep as she normally does. Then opportunity knocks and Mabrey was obliged to answer it. With the score tied 31 all, Mabrey makes the three and Purcell Pavilion erupted in celebration. Everyone loves a buzzer beater. They love it even more when you are the walk-on. Kaitlin Cole ended the half as she laid it in for an easy two at the buzzer, as she brought the score to 45 all.

A story of two halves

The third quarter started on a high note for the Irish. Kathryn Westbeld had checked into the game after sitting out the first half. Westbeld made her presence known on the floor. Her first play was a defensive rebound, that brought the Irish faithful to their feet. And at that point, the tempo of the game switched. The Irish dominated the third quarter. The game turned into a game of runs. The Irish had an 8-0 run over the time span of a minute and a half, and a second run of the same amount of points in the last two and a half minutes.

A couple of highlights from the quarter included a Mabrey steal in which she then she threw a touchdown pass to Young who scored an easy two. As Ogunbowale was not going to be out done by her teammate, she rebounded the ball from the defensive glass and took it coast to coast and laid it in for two. Nova had only three baskets and two free throws in the third quarter. Compare that to seven missed shots, which included a three-pointer and eight missed free throws. By the end of the quarter, the Irish had built up their lead to twenty points, allowing only eight points by the Nova offense.

And don’t look back

The fourth quarter was about keeping the foot on the throttle, while not letting Nova get a second wind. The Irish as a group did not allow the Wildcats a single three-point shot in the fourth quarter. The Wildcats were 0-5 the entire second half. The Irish had finally figured out the Nova offense, forcing them into the paint and making them abandon their game plan completely. Instead of making three-pointers, Nova would have to settle for two point scoring and get back to making free throws. Ogunbowale added a little salt to Nova’s wounds as she added a reverse lay-up to her evening game. Overall the Irish played a fantastic game. The team had 48 rebounds, 19 on offense and 29 on defense. With 4:02 left in the game, Westbeld exited the Irish court for the last time. Westbeld waved to the fans in attendance and was greeted by a hug from Coach McGraw. 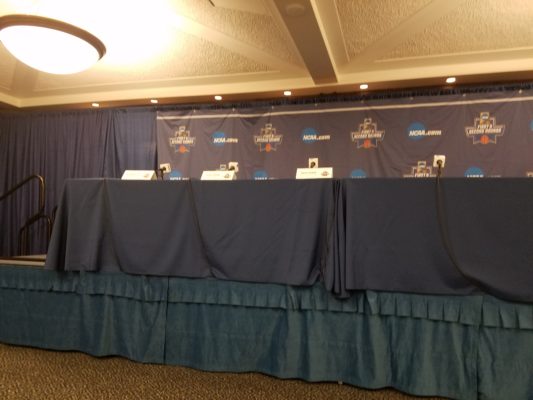 Coach McGraw remarked about the game. “We obviously defended a lot better in the second half. We were very excited to have Kat available for the second half and change the course of the game. We’re just a very different team with her on the floor,” Notre Dame head coach Muffet McGraw said. “Jess was just unstoppable inside. Our game plan was to go inside and she did everything we needed her to do.”

The Notre Dame Women’s Basketball team travels West to Spokane, WA for a match-up against #4 Texas A&M (26-9). The game will be broadcast on ESPN (4PM EST, 1 PM PST.) #GoIrish