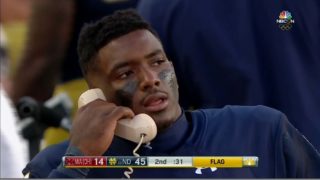 We, as Notre Dame football fans, will always have an eagle eye out for anything that seems potentially broken. We can’t help it. We’ve been hurt too much in the past. We constantly await for the other shoe to drop.

So, as great as the win against Miami of Ohio was, we can’t help but feel concerned about Brandon Wimbush’s 7-18, 119 yard performance. Yes, three of those passes were for TD’s, allowing for his QBR to not dovetail into horrendous territory, although a 61.5 will earn no more than a solid “meh”. In fact, Wimbush would agree as he gave himself a “C/C+” when interviewed on the NBCSN postgame show.

With this in mind, I wanted to break down every single pass and try to parse his performance. This means looking at every single passing play, whether it was a scramble, sack, thrown away, drop or a play wiped out by a penalty. Here’s what I charted for Wimbush in the game:

That’s 11 out of 20 passes (55%) that were good throws. Oddly enough, one of his completions was an underthrown at Deon McIntosh’s feet. Needless to say, this is far from encouraging.

I was close to bumping this up to 12 on target passes (60%) and crediting Adams with a drop on the opening drive. The pass went off his finger tips and was eerily similar to the great catch Chris Finke made in the fourth quarter on Ian Book’s bomb. I went ahead and credited Wimbush with the overthrow as I feel it’s more fair to put the onus on Wimbush for a more accurate pass rather than a running back laying out for a catch.

However, with that in mind, and looking at who these passes were being thrown to, I found a rather interesting pattern. Take a look at the below:

To me, it’s clear Wimbush has a lot of trust in both ESB and Claypool. Save for the lone overthrow on a long play action attempt to ESB, everything else was on traget to those two. This includes a 50/50 fade that Wimbush trusted Claypool to make a play on, resulting in a TD.

Boykin is the other lone Irish receiver pulled down a completion on a great Wimbush pass (a long TD bomb). This also stood out a bit as my mind immediately went back to the Blue/Gold game in which Wimbush to Boykin seemed like it was going to be a more regular thing than it is now.

Wimbush also looked to make an effort to get Stepherson going in this game. While the drop was a called screen for Stepherson, the other pass that was completely off target looked to be a total miscommunication between the two as Wimbush threw to a route that Stepherson wasn’t running (and Claypool was running wide open beneath him). This drive resulted in the only three and out for the Irish as Wimbush took a sack the very next play (the fake punt saved the Irish from two on the day).

This leads me to wondering if Wimbush is pressing more on throws to people not named Equanimeous and Chase (and maybe even Miles). While Wimbush certainly is having mechanical issues, I do wonder I Wimbush has a mentality of “make this perfect” to receivers he may not have complete trust in, leading to everything going haywire.

The only thing that I can personally relate to is back when I pitched. If my defense made a brutal errors behind me, more often than not, it led to me pressing–not a good thing for someone that didn’t have good strikeout stuff. Anytime this happened, my mechanics, and therefore my accuracy, went to hell. Before long, I’d get the hook and a seat on the bench for losing control of the game.

Part of me wants to feel better about this theory. On one hand, ESB and Claypool have stepped up to be the clear #1 and #2 threats for the Irish. Plus, this has some signs of Wimbush doing what any other first-year starter does, slowly building trust/timing to his WR corps. On the other hand, there’s the terrifying possibility that Wimbush is in his own head and that’s something that’s very hard to simply coach/break someone out of.

Time, and the rest of the season, will tell which is true. I see the encouraging possibilities and potential for this offense as the season goes on. It’s up to Wimbush to execute, excel, and make the passing game into a deadly weapon for the Irish.

Previous Post: « Another Step in the Process
Next Post: HLS Podcast: How’s the Weather in the Carolinas? »