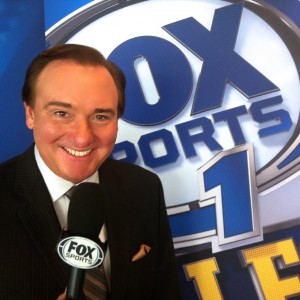 FOX Sportscaster Tim Brando told The Aubible podcast today that he believes Notre Dame will forgo its independent status in football and become a full-time member of the Atlantic Coast Conference within three years. Brando added that Coach Brian Kelly would prefer the Irish join a conference than remain independent.

“Rights fees continue to move upward,” Brando told FOX’s Bruce Feldman and Stewart Mandel. “I do believe it’s going to happen when Notre Dame understands that it’s in their financial best interests to be in a conference. Because they cannot command the same same dollar from NBC or any other network by simply having seven home games televised.”

Notre Dame is bound by the terms of a 2013 contract to join the ACC if it decides to join a conference in the next nine years.

Brando said he’s had “many conversations – both publicly and privately” with Kelly about Notre Dame’s independent status and said, “I don’t think there’s any doubt he would prefer to be in a conference.”

“The major reason why you do it, fellas, is not because the coach wants it,” said Brando. “It’s because it makes economic sense. It does make economic sense – and will make even more sense – as these continuing rights fees continue to spiral and move upwards. A lot of things about the television business are being compressed, but rights fees are not. They continue to go upwards. And as a group, Notre Dame as an individual institution – maybe a few years ago, a deal like the one they have with NBC was a seminal moment in broadcasting and in sports for a school to have its own network television deal. That’s not true any more. That’s before the SEC was raking in all this cash and before [Big Ten Commissioner] Jim Delaney was able to put a deal together like the one he did with FOX and has a looming second-tier to negotiate. As a conference, you are stronger than any one institution and yes, that does include the great Notre Dame.”

Notre Dame and NBC have a contract through 2025. Although terms were not disclosed, the previous five-year deal, which elapsed last year, was thought to be worth $15 million annually to the university.

That $15 million figure – although it’s assuredly higher now – doesn’t compare favorably to other deals, as outlined by SB Nation:

“Each year, Fox will pay the Big Ten as much as $250 million a season for the 25 games in their half of the Big Ten’s top-level rights. Keep in mind that the Big Ten’s agreement with BTN continues for another fifteen years and is NOT included in this figure. How do these numbers compare to the other “Power Five” conferences?

So it Brando right? Or is his prediction headed for @OldTakesExposed? I’m guessing he’s wrong. But we’re see you back here in three years with an update.