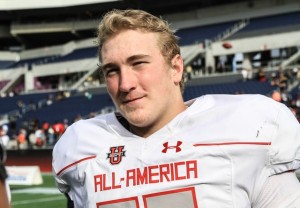 Host: A couple of weeks ago there were reports of a few other linemen that supposedly got offered for Notre Dame. Notre Dame already has three linemen. You want to tell us about that how that went down?

Eichenberg: Parker [Boudreaux] put in the group message between Tommy [Kraemer], him and myself. It said that this kid got offered. I mean, I spent a week with him down at the Under Armour All-American game. He’s a great athlete and stuff. But mentally, I just didn’t think he had what it took. He was always late. He just forgot a lot of stuff. I didn’t think that was the kind of guy that Coach Hiestand would want. We were just surprised that Coach Hiestand would offer him. 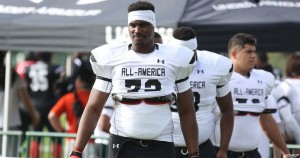 Although no names are mentioned, it’s not hard to deduce who Eichenberg is talking about.

For what it’s worth, Eichenberg is considered a better prospect than Williams, with the former being the 9th best offensive tackle and the latter being ranked 17th, according to 247 Sports. So is Kramer, who is ranked third on that list. Boudreaux is ranked lower, but plays guard.

If I’m to speculate, I guess Eichenberg knows Williams is not taking his Notre Dame offer seriously and will probably attend another school. It’s easy to criticize a guy you’ll never play alongside.

It’s refreshing, however, to hear an athlete give his (supposedly) honest assessment of a competitor. Players are being less blunt these days because they’ve weighed the risk and reward of speaking out. The media recognizes that any controversial viewpoint is sustaining fodder for the various news and opinion programs that fill the day – and that their viewers will happily consume it. Thus, otherwise benign comments are sometimes distorted to keep eyeballs on the television or computer screen.

What if I had titled this post “Eichenberg criticizes future coach’s judgment”? That’s certainly one interpretation of Eichenberg’s comments, although I don’t think that was the teenager’s intention at all. 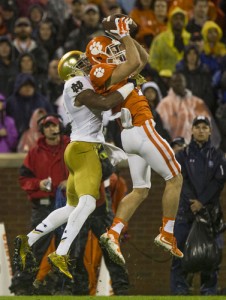 When Eichenberg joins his college team, Notre Dame will talk to him – and all his fellow student-athletes – about being careful about what they tell the press. Everything can be misconstrued, or blown out of proportion. They may use the example of KeiVarae Russell, who, in the midst of complimenting DeShaun Watson, called the Clemson quarterback “not overly superior” and suggested he’s played against better.

It’s an accurate headline, sure. But it intentionally skews the statement to suggest it was a straight dis, when the overall comment is pretty laudatory. Perhaps this headline was put on a bulletin board in the Tigers’ locker room or sent to Watson for extra motivation.

Eichenberg will probably be more measured in his assessment of opponents, teammates or coaches by the time he is allowed to talk to the Notre Dame beat writers. In a way, that will be our fault. We clicked on the articles, which increased the ad revenue, which suggested to writers that, in the competition for eyeballs, outrageous sells much better than nuance. Coaches see the comments – or perhaps they’re asked about them – and they encourage the student-athlete to say fewer things that cause them unnecessary headaches.

What we’re left with is guys like Don Carman, who recognized that most beat reporters don’t care about introspection. They just want to fill column inches and go home to their families. It was easier to say a lot of nothing than a bit of something.

I hope Eichenberg has the courage to continue to be candid with the press and, by extension, the fans, although I wouldn’t blame him if he realizes the juice isn’t worth the squeeze.