One thing that stood out to me during the ND/Navy game this past Saturday was that the defense looked monumentally better against the option than they did against Air Force.  So I took a dive into some numbers to check out just how much improvement the team made.

Note: For those that have Flickr images blocked, I have made a Google Doc as well for all charts. 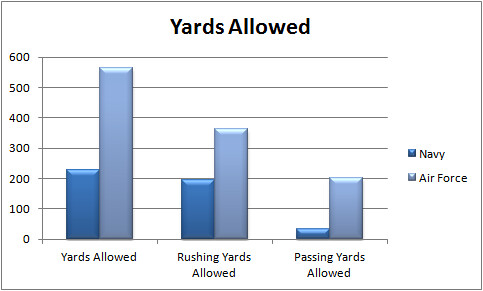 Obviously, we preformed monumentally better against Navy across the board.  Going a bit deeper into the stats, we see more improvement, as the Irish restricted Navy from breaking the big play: 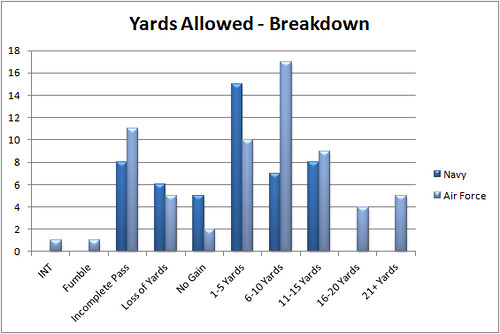 Against Air Force, ND gave up a handful of plays of 16 yards or more, including five of which that were over 21 yard gains.  However, against Navy, the Irish gave up zero plays beyond 16 yards with 15 yards being the biggest gain of the day for Navy.  The Irish also forced five Navy plays for no gain, a feat only accomplished twice against Air Force.  Also in the improvement category was the amount of plays that the Irish forced a loss of yardage, albeit slight.

The majority of the plays against Navy stayed within the 1-5 yard range, a noticeable improvement over Air Force in which the majority of plays given up were between 6-10 yards.  This trend demonstrates the Irish’s capability to keep much better contain against the Middies, leading to a dramatic reduction in overall yards gained in comparison to Air Force.

As I mentioned in my breakdown of Air Force, there is much more to beating an option team than the yards you allow.  So let’s take a look at the winning drives for the defense and offense (Note: I did not include end of half/end of game drives) as well as a few other defensive stats. 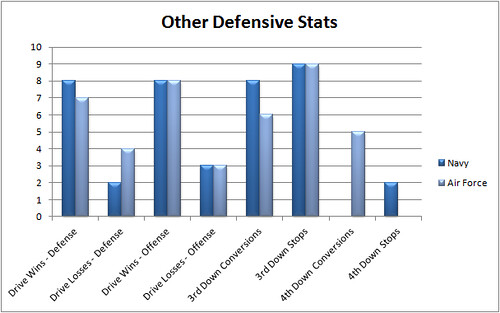 For the most part, all the numbers are comparable.  While the offense had the same success in both games, the defense won one more drive against Navy and lost two less as well.  While that may not seem like much, losing two less drives alone equates to 14 points removed from Navy’s score and the extra win an additional 3-7 points removed.  17-21 points is quite a big deal, especially if the offense had sputtered, which thankfully it didn’t.

The Irish did give up 2 more 3rd down conversions to Navy than it did against Air Force.  While that might seem somewhat concerning, ND had dramatic improvement on 4th downs.  Against Navy, the Irish stuffed both fourth down attempts, quite a large improvement from allowing Air Force to convert all of their 4th down attempts.

To me, the difference between the two games are simply staggering.  Personally, I don’t care if Navy was forced to used their backup QB.  You simply do not see this kind of improvement and chalk it up to a substitution of a QB who, quite frankly, did not make any major mistakes that cost his team.  The Irish did a much better job of staying on their assignments and not over-pursuing which happened constantly during Air Force and it showed.

Hopefully, this means that we can put to rest any fears of ND and Diaco simply not being able to defend the option.