If you had asked me before the game whether or not Notre Dame was going to beat Texas in the season opener, my answer was a resounding yes. But as we know with all season opening games, there are a lot of unknowns, and no one really knows what their team is made of until they actually put on the pads and hit the field. Unfortunately, the Notre Dame Fighting Irish came up three points short in the outing on Sunday versus the Texas Longhorns. Now there are people calling for not only Coach VanGorder’s head, but Coach Kelly’s as well, and some are already writing off the entire season as a total loss. Slow down there, Sparky. How did the Notre Dame defense perform against Texas? Let’s take a look at the numbers.

The Fighting Irish allowed the Longhorns to convert on third down 8-of-18 times, and on fourth down 2-of-2 times. The Longhorn offense was pretty much unstoppable in the red zone, converting 7-of-7 times, with six touchdowns and one field goal. The Notre Dame defense did not have any sacks on Sunday, but they did score 14 points on turnovers. And as for time of possession, the Texas offense had the ball for 27:18 minutes, and Notre Dame had the ball for 32:42 minutes.

Some interesting soundbites from und.com:

The defense takes the mic, (from und.com):

On tonight’s result: It’s a tough loss. There’s not much else to say about it. We played hard today, some things went our way and some things didn’t and that’s the way football is.

On how disappointing it is to make a comeback but fall short of a victory: It’s heartbreaking. We were right there throughout the whole game and we had momentum in the second half. Things didn’t go our way when we needed them to and it’s heartbreaking.

On if Texas made adjustments that threw the Irish off: No, they were doing the same stuff pretty much all game. We didn’t see a lot of adjustments. We missed a couple of things here and there that we should’ve seen and it wasn’t anything special that they were throwing at us. They played really, really hard. It comes down to the way we execute our plays and we didn’t do that when we needed to.

On tonight’s game: It was tough and especially on the road you hate to lose and with everybody running on the field… But there’s good things we can take from it. It’s not all bad. I think our team did a really good job of coming back from a pretty bad deficit. We were resilient and I think that says a lot about our team moving forward. But it does suck.

On holding the Longhorns scoreless for much of the second half: Like I said, we were resilient and we made decisions. For the defensive line we said we were going to penetrate and not get pushed back. We dealt with some of that. So that was the big thing: we made a decision.

On why the team was not able to hold onto momentum at the end: I don’t know, I’d have to watch the film. I don’t really have an answer for that. Both teams were fatigued. I think they ran 80-something plays, but they ran them and we went against it. It’s an even playing field as far as fatigue.

On how disappointing the loss is: It’s disappointing. We hate to lose the first game and we’ve never lost an opener.

On holding the Longhorns scoreless for much of the second half: We kind of got settled in. We had some guys out there who hadn’t played yet so getting those guys to settle in happened a little too late for us.

On what made Texas’ two-quarterback system difficult: I mean, there wasn’t much. They’re both good players. They both did different things to us, so I guess just understanding which quarterback’s in and what to expect. Obviously we saw [Tyrone] Swoopes was going to run the ball pretty much every time so it’s getting guys to understand that.

A loss is never easy to stomach, especially in a game where we came back from a pretty substantial second half deficit to tie the game and give ourselves a pretty great chance to seal the deal and win the game. When you look at the numbers side by side, the Notre Dame defense certainly wasn’t overpowered, but for some reason they just could not finish the game. Would things have been different had Max Redfield been in the game? We’ll never know that one for sure, but that thought has crossed my mind in the last day, for sure. I know games are not won or lost on one player, it is a team effort, but could that one player have pushed them over the top, to the win? Food for thought for sure.

Is our season over? Far from it. VanGorder needs to get the guys in front of some game film, practice the plays they missed on Sunday and start looking forward to Nevada.

What say you? Is our season over? Or will we be just fine after a week of practice, learning and regrouping? 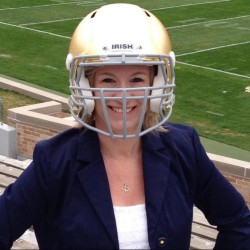