Some Twitter conversations on National Signing Day got me thinking: are we in the Era of Peak ND Player Names? Brian Kelly’s most recent additions to the football team makes a compelling case. Of course I had to find out, so I perused the archives and established the following criteria:

These folks presented strong arguments, but ultimately I had to narrow things down to a two-deep by position. Notre Dame Football maintains a rich history in many areas, and as you’ll see, the omissions of the following individuals from the final cut speaks to the strength of the final field.

“Arnaz Battle” is about as sweet of a football name as you’ll find, but let’s be honest: you’re not getting turned down by ND Admissions with a name like “Rockne Morrissey”. We have a Friendly Ghost, an anagram, a Greek god, a state supreme court justice, and the man responsible for scoring the winning TD following the “Win one for the Gipper” speech. So with that as an introduction, let’s get to it.

A 5’5″ kicker from Hawaii whose story just got made into a 30 for 30? That’ll get you a starting spot. And while we didn’t have room for The Bard of Stratford on offense, he did some punting so we’ll include him here.

Zibby’s popularity with the fans gives him the nod here, and Garron Bible is a (theo)logical choice. Let’s get new assistant coach Todd Lyght in the mix here, and we’ll round things out by naming a Zloch-down corner.

Not one of the original Four Horsemen via @LTorbin

The Nigerian from Dublin (Ohio) alerted the coaching staff to his high school QB (you may have heard of Brady Quinn), and I don’t want to be running routes over the middle if there’s a chance I’m going to encounter a guy named “Jamoris Slaughter”.

Simpsons fans (and those of the first part of the 2002 season) will appreciate Vontez Duff, and the Four Horsemen played both ways back in the day, so they’re represented here.

Heimkreiter sounds like he belongs in the trenches along the Western Front. And just now I realized I’ve omitted the entire mid-’90s LB corps of La’Ron Cobbins, Kinnon Tatum, and Kory Minor. Please excuse me while I change my home address, phone number, and pants.

Everyone knows Manti these days (for one reason or another), and I want my linebackers with good, sturdy surnames.

Come to think of it, I’d like to see these four terrifying gentlemen on the line at the same time, as all were formidable in their day.

The flashy positions with the sexy names are coming up, but give me linemen with Eastern European surnames ending in vowels, and a left side of Plantz and Paine.

When your first name is Romanus you need a good nickname…like “Peaches”. Hunk Anderson (hello, ladies!) was both a player and a coach, and Fuzzy is the McGlew holding this line together.

Here is where it gets a little ridiculous, because on the bench we have: a man who inspired a football legend and whose nickname was co-opted by a United States President; a four-time Super Bowl winner and Vietnam combat veteran; and a guy who changed the pronunciation of his name to rhyme with a certain trophy…whose names could be more impressive than this?

I am ashamed to admit I was unaware that we had a back named “Hiawatha”. Asaph Schwapp gets the nod here on the strength of his given name, and the first left-handed QB in ND history isn’t doing too badly in the name department either.

Alizé Jones has yet to take a snap for the Irish, but that first name is good enough for honorable mention. Golden Tate was a name made for Notre Dame, obviously.

“Imhotep”? Even I can’t compete with that…

I looooved me some Chryplewicz in the Holtz offense, but let’s get to the main event. Knute Rockne deserves a permanent all-time slot for his contributions to football and Notre Dame lore…which brings us to Equanimeous St. Brown. Yes, that is his full name above, and if his play his half as good as his birth certificate, Irish fans will be happy for the next few years. 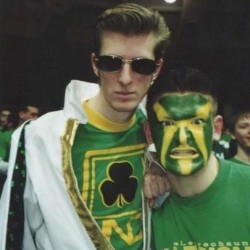