Home > Notre Dame Football > All Aboard: The Subway Alumni

Leo and Michael never attended the University of Notre Dame, but they are among the Notre Dame Alumni Club of New Orleans’ most dedicated game watch attendees. Fresh on the heels of the Blue Gold Game weekend and The Shirt’s unveiling, I wanted to explore with them why they cheer for Notre Dame.

I know you’ve heard it before, but New Orleans is not like the rest of America, for better and for worse. What you may not believe, is that it’s not even like the rest of Louisiana. New Orleansis a very Catholic city, but it’s Catholicism is incorporated into its fabric, like the air or the humidity. Catholicism is not something you necessarily wear on your sleeve here, but you know the date of Ash Wednesday 2019. If you don’t, you’re a tourist. The rest of Louisiana doesn’t necessarily get on with New Orleans, and that animosity starts once you cross the 17th Street Canal. As you get further away, say, to the airport, in Kenner, you’re squarely and certainly beyond the pale. And you only see LSU hats. LSU is Louisiana: Huey Long, the former Governor, massively increased the Tiger Band, wrote music for it AND EVEN DESIGNED A PLAY FOR THE TEAM TO RUN. Take that, Robert Bentley.

"Yes, I think you've seen me before." Image credit: the author.

So, while the rest of Louisiana does the “Tiger Rag” on Saturdays, in New Orleans, you’ll hear things like “The Hullabaloo Cheer” or “Stand Up and Get Krunk” or “Wobble Baby.” We’re gumbo and we know it.

So Leo, a Pittsburgh native living here now, is the only person I know who has every Shirt. After I told him about my Katrina experience and how I lost the few Shirts I kept with me since graduating in 1994, he told me he would start storing his collection in a Tupperware tub. “I wouldn’t know what to do if I lost my Notre Dame stuff.” It’s part of his identity. He’s very proud that a Notre Dame student once stopped at his home and asked to pose for a picture for his mother and father in front of Leo’s ND flag. The student was on his way to Notre Dame to start his freshman year.

Some of Leo's Shirts. Image Credit: Leo. Note the singular awfulness of the flesh-colored Shirt.

Leo and Michael are “Subway Alumni”, a term that was first used to describe the fans living in and around New York City who travelled by subway to see Notre Dame play Army, once the huge crowds forced those games from the confines of West Point first to the Polo Grounds, Ebbets Field, and, ultimately, Yankee Stadium. On December 2, 1933, for example, the Lincoln, Nebraska, Star noted to its readers that “[. . .] up today from the sidewalks of New York will come the famous ‘Subway Alumni’ to rally around its favorite team and try to make it win.” The Subway Alumni were mostly immigrants or Catholics and usually both and as they moved throughout the country, so did their love for Notre Dame.

The Subway Alumni created an ND Nation long before the internet was a twinkle in Al Gore’s eye. Their tweets were the pop-and-crackle of the radio and later, the snow of early television. It’s no small thing that when Michael Corleone visits Hyman Roth, Roth is watching the 1958 Notre Dame-USC game, which, for those interested in historical detail, was a 20-13 Irish victory. To a movie-goer watching The Godfather II in 1974, Notre Dame’s presence in the scene would have been as natural as the Florida sun.

Michael, the Subway Alum not the Mob boss, ascribes his allegiance to Notre Dame to his genes. “I’m Polish and Catholic and from Chicago. My birth-certificate came out Blue and Gold.” He watches football games as another would the priestly sacrifice and explains that “I’m not the best Catholic. ND football is my church.” Perhaps “take this, all of you, and drink from it” is just another way of saying “this round’s on me.”

Leo ultimately puts his loyalty to Notre Dame down to the place and its people. One of his best ND memories, for example, came as a young man when the hospitality of ND fans carried him through a football weekend. “I drove toSouth Bendwith forty dollars in my pocket and drove home with the same forty dollars still there!” As the mills in Pittsburgh closed and Leo moved away, he never lost his affection for ND, despite the distance.

That, likely, is a very familiar experience for all alumni. 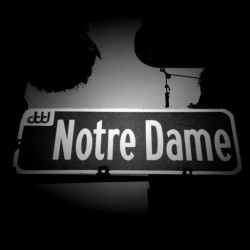